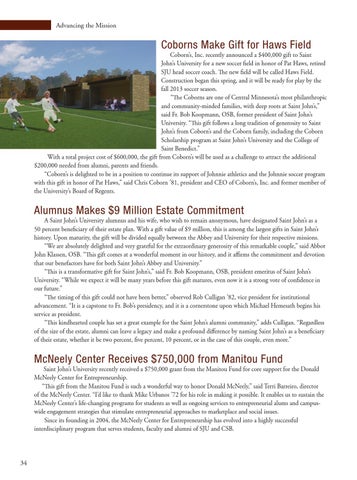 Coborns Make Gift for Haws Field Coborn’s, Inc. recently announced a $400,000 gift to Saint John’s University for a new soccer field in honor of Pat Haws, retired SJU head soccer coach. The new field will be called Haws Field. Construction began this spring, and it will be ready for play by the fall 2013 soccer season. “The Coborns are one of Central Minnesota’s most philanthropic and community-minded families, with deep roots at Saint John’s,” said Fr. Bob Koopmann, OSB, former president of Saint John’s University. “This gift follows a long tradition of generosity to Saint John’s from Coborn’s and the Coborn family, including the Coborn Scholarship program at Saint John’s University and the College of Saint Benedict.” With a total project cost of $600,000, the gift from Coborn’s will be used as a challenge to attract the additional $200,000 needed from alumni, parents and friends. “Coborn’s is delighted to be in a position to continue its support of Johnnie athletics and the Johnnie soccer program with this gift in honor of Pat Haws,” said Chris Coborn ’81, president and CEO of Coborn’s, Inc. and former member of the University’s Board of Regents.

Alumnus Makes $9 Million Estate Commitment A Saint John’s University alumnus and his wife, who wish to remain anonymous, have designated Saint John’s as a 50 percent beneficiary of their estate plan. With a gift value of $9 million, this is among the largest gifts in Saint John’s history. Upon maturity, the gift will be divided equally between the Abbey and University for their respective missions. “We are absolutely delighted and very grateful for the extraordinary generosity of this remarkable couple,” said Abbot John Klassen, OSB. “This gift comes at a wonderful moment in our history, and it affirms the commitment and devotion that our benefactors have for both Saint John’s Abbey and University.” “This is a transformative gift for Saint John’s,” said Fr. Bob Koopmann, OSB, president emeritus of Saint John’s University. “While we expect it will be many years before this gift matures, even now it is a strong vote of confidence in our future.” “The timing of this gift could not have been better,” observed Rob Culligan ’82, vice president for institutional advancement. “It is a capstone to Fr. Bob’s presidency, and it is a cornerstone upon which Michael Hemesath begins his service as president. “This kindhearted couple has set a great example for the Saint John’s alumni community,” adds Culligan. “Regardless of the size of the estate, alumni can leave a legacy and make a profound difference by naming Saint John’s as a beneficiary of their estate, whether it be two percent, five percent, 10 percent, or in the case of this couple, even more.”