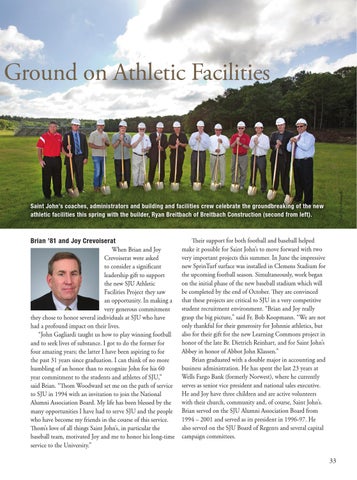 Saint John’s coaches, administrators and building and facilities crew celebrate the groundbreaking of the new athletic facilities this spring with the builder, Ryan Breitbach of Breitbach Construction (second from left).

Brian ’81 and Joy Crevoiserat When Brian and Joy Crevoiserat were asked to consider a significant leadership gift to support the new SJU Athletic Facilities Project they saw an opportunity. In making a very generous commitment they chose to honor several individuals at SJU who have had a profound impact on their lives. “John Gagliardi taught us how to play winning football and to seek lives of substance. I got to do the former for four amazing years; the latter I have been aspiring to for the past 31 years since graduation. I can think of no more humbling of an honor than to recognize John for his 60 year commitment to the students and athletes of SJU,” said Brian. “Thom Woodward set me on the path of service to SJU in 1994 with an invitation to join the National Alumni Association Board. My life has been blessed by the many opportunities I have had to serve SJU and the people who have become my friends in the course of this service. Thom’s love of all things Saint John’s, in particular the baseball team, motivated Joy and me to honor his long-time service to the University.”

Their support for both football and baseball helped make it possible for Saint John’s to move forward with two very important projects this summer. In June the impressive new SprinTurf surface was installed in Clemens Stadium for the upcoming football season. Simultaneously, work began on the initial phase of the new baseball stadium which will be completed by the end of October. They are convinced that these projects are critical to SJU in a very competitive student recruitment environment. “Brian and Joy really grasp the big picture,” said Fr. Bob Koopmann. “We are not only thankful for their generosity for Johnnie athletics, but also for their gift for the new Learning Commons project in honor of the late Br. Dietrich Reinhart, and for Saint John’s Abbey in honor of Abbot John Klassen.” Brian graduated with a double major in accounting and business administration. He has spent the last 23 years at Wells Fargo Bank (formerly Norwest), where he currently serves as senior vice president and national sales executive. He and Joy have three children and are active volunteers with their church, community and, of course, Saint John’s. Brian served on the SJU Alumni Association Board from 1994 – 2001 and served as its president in 1996-97. He also served on the SJU Board of Regents and several capital campaign committees.