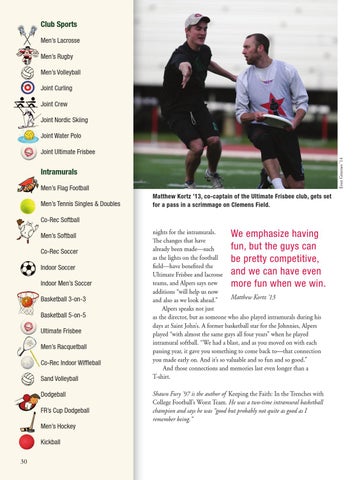 Matthew Kortz ’13, co-captain of the Ultimate Frisbee club, gets set for a pass in a scrimmage on Clemens Field.

We emphasize having fun, but the guys can be pretty competitive, and we can have even more fun when we win.

nights for the intramurals. The changes that have already been made—such as the lights on the football field—have benefited the Ultimate Frisbee and lacrosse teams, and Alpers says new additions “will help us now Matthew Kortz ’13 and also as we look ahead.” Alpers speaks not just as the director, but as someone who also played intramurals during his days at Saint John’s. A former basketball star for the Johnnies, Alpers played “with almost the same guys all four years” when he played intramural softball. “We had a blast, and as you moved on with each passing year, it gave you something to come back to—that connection you made early on. And it’s so valuable and so fun and so good.” And those connections and memories last even longer than a T-shirt.

Shawn Fury ’97 is the author of Keeping the Faith: In the Trenches with College Football’s Worst Team. He was a two-time intramural basketball champion and says he was “good but probably not quite as good as I remember being.”