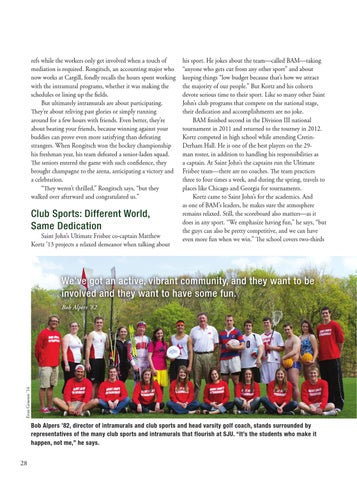 refs while the workers only get involved when a touch of mediation is required. Rongitsch, an accounting major who now works at Cargill, fondly recalls the hours spent working with the intramural programs, whether it was making the schedules or lining up the fields. But ultimately intramurals are about participating. They’re about reliving past glories or simply running around for a few hours with friends. Even better, they’re about beating your friends, because winning against your buddies can prove even more satisfying than defeating strangers. When Rongitsch won the hockey championship his freshman year, his team defeated a senior-laden squad. The seniors entered the game with such confidence, they brought champagne to the arena, anticipating a victory and a celebration. “They weren’t thrilled,” Rongitsch says, “but they walked over afterward and congratulated us.”

his sport. He jokes about the team—called BAM—taking “anyone who gets cut from any other sport” and about keeping things “low budget because that’s how we attract the majority of our people.” But Kortz and his cohorts devote serious time to their sport. Like so many other Saint John’s club programs that compete on the national stage, their dedication and accomplishments are no joke. BAM finished second in the Division III national tournament in 2011 and returned to the tourney in 2012. Kortz competed in high school while attending CretinDerham Hall. He is one of the best players on the 29man roster, in addition to handling his responsibilities as a captain. At Saint John’s the captains run the Ultimate Frisbee team—there are no coaches. The team practices three to four times a week, and during the spring, travels to places like Chicago and Georgia for tournaments. Kortz came to Saint John’s for the academics. And as one of BAM’s leaders, he makes sure the atmosphere remains relaxed. Still, the scoreboard also matters—as it does in any sport. “We emphasize having fun,” he says, “but the guys can also be pretty competitive, and we can have even more fun when we win.” The school covers two-thirds