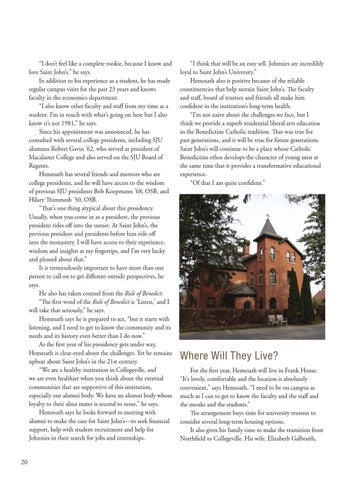 “I don’t feel like a complete rookie, because I know and love Saint John’s,” he says. In addition to his experience as a student, he has made regular campus visits for the past 23 years and knows faculty in the economics department. “I also know other faculty and staff from my time as a student. I’m in touch with what’s going on here but I also know it’s not 1981,” he says. Since his appointment was announced, he has consulted with several college presidents, including SJU alumnus Robert Gavin ’62, who served as president of Macalaster College and also served on the SJU Board of Regents. Hemesath has several friends and mentors who are college presidents, and he will have access to the wisdom of previous SJU presidents Bob Koopmann ’68, OSB, and Hilary Thimmesh ’50, OSB. “That’s one thing atypical about this presidency. Usually, when you come in as a president, the previous president rides off into the sunset. At Saint John’s, the previous president and presidents before him ride off into the monastery. I will have access to their experience, wisdom and insights at my fingertips, and I’m very lucky and pleased about that.” It is tremendously important to have more than one person to call on to get different outside perspectives, he says. He also has taken counsel from the Rule of Benedict. “The first word of the Rule of Benedict is ‘Listen,’ and I will take that seriously,” he says. Hemesath says he is prepared to act, “but it starts with listening, and I need to get to know the community and its needs and its history even better than I do now.” As the first year of his presidency gets under way, Hemesath is clear-eyed about the challenges. Yet he remains upbeat about Saint John’s in the 21st century. “We are a healthy institution in Collegeville, and we are even healthier when you think about the external communities that are supportive of this institution, especially our alumni body. We have an alumni body whose loyalty to their alma mater is second to none,” he says. Hemesath says he looks forward to meeting with alumni to make the case for Saint John’s—to seek financial support, help with student recruitment and help for Johnnies in their search for jobs and internships.

“I think that will be an easy sell. Johnnies are incredibly loyal to Saint John’s University.” Hemesath also is positive because of the reliable constituencies that help sustain Saint John’s. The faculty and staff, board of trustees and friends all make him confident in the institution’s long-term health. “I’m not naive about the challenges we face, but I think we provide a superb residential liberal arts education in the Benedictine Catholic tradition. That was true for past generations, and it will be true for future generations. Saint John’s will continue to be a place whose Catholic Benedictine ethos develops the character of young men at the same time that it provides a transformative educational experience. “Of that I am quite confident.”

Where Will They Live? For the first year, Hemesath will live in Frank House. “It’s lovely, comfortable and the location is absolutely convenient,” says Hemesath. “I need to be on campus as much as I can to get to know the faculty and the staff and the monks and the students.” The arrangement buys time for university trustees to consider several long-term housing options. It also gives his family time to make the transition from Northfield to Collegeville. His wife, Elizabeth Galbraith,