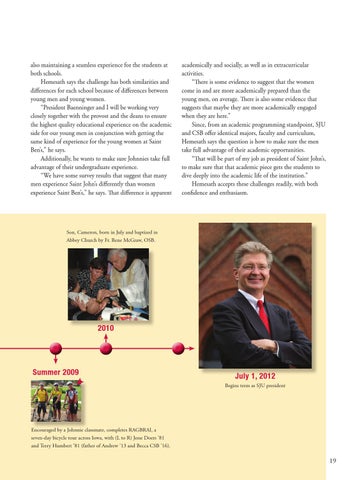 also maintaining a seamless experience for the students at both schools. Hemesath says the challenge has both similarities and differences for each school because of differences between young men and young women. “President Baenninger and I will be working very closely together with the provost and the deans to ensure the highest quality educational experience on the academic side for our young men in conjunction with getting the same kind of experience for the young women at Saint Ben’s,” he says. Additionally, he wants to make sure Johnnies take full advantage of their undergraduate experience. “We have some survey results that suggest that many men experience Saint John’s differently than women experience Saint Ben’s,” he says. That difference is apparent

academically and socially, as well as in extracurricular activities. “There is some evidence to suggest that the women come in and are more academically prepared than the young men, on average. There is also some evidence that suggests that maybe they are more academically engaged when they are here.” Since, from an academic programming standpoint, SJU and CSB offer identical majors, faculty and curriculum, Hemesath says the question is how to make sure the men take full advantage of their academic opportunities. “That will be part of my job as president of Saint John’s, to make sure that that academic piece gets the students to dive deeply into the academic life of the institution.” Hemesath accepts these challenges readily, with both confidence and enthusiasm.

Encouraged by a Johnnie classmate, completes RAGBRAI, a seven-day bicycle tour across Iowa, with (L to R) Jesse Doers ’81 and Terry Humbert ’81 (father of Andrew ’13 and Becca CSB ’16).