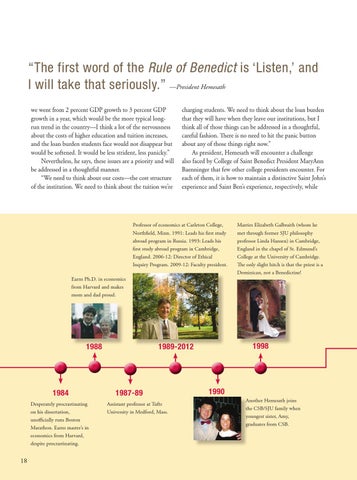 “The first word of the Rule of Benedict is ‘Listen,’ and I will take that seriously.” —President Hemesath we went from 2 percent GDP growth to 3 percent GDP growth in a year, which would be the more typical longrun trend in the country—I think a lot of the nervousness about the costs of higher education and tuition increases, and the loan burden students face would not disappear but would be softened. It would be less strident, less panicky.” Nevertheless, he says, these issues are a priority and will be addressed in a thoughtful manner. “We need to think about our costs—the cost structure of the institution. We need to think about the tuition we’re

charging students. We need to think about the loan burden that they will have when they leave our institutions, but I think all of those things can be addressed in a thoughtful, careful fashion. There is no need to hit the panic button about any of those things right now.” As president, Hemesath will encounter a challenge also faced by College of Saint Benedict President MaryAnn Baenninger that few other college presidents encounter. For each of them, it is how to maintain a distinctive Saint John’s experience and Saint Ben’s experience, respectively, while

Marries Elizabeth Galbraith (whom he met through former SJU philosophy professor Linda Hansen) in Cambridge, England in the chapel of St. Edmund’s College at the University of Cambridge. The only slight hitch is that the priest is a Dominican, not a Benedictine!

1990 Another Hemesath joins the CSB/SJU family when youngest sister, Amy, graduates from CSB.