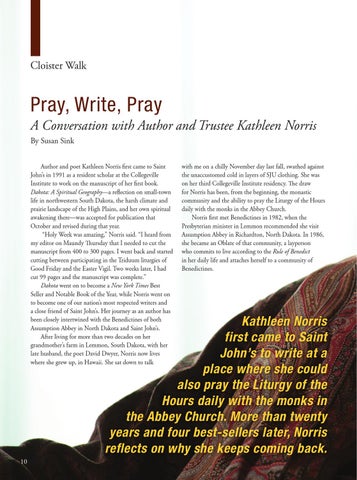 Pray, Write, Pray A Conversation with Author and Trustee Kathleen Norris By Susan Sink Author and poet Kathleen Norris first came to Saint John’s in 1991 as a resident scholar at the Collegeville Institute to work on the manuscript of her first book. Dakota: A Spiritual Geography—a reflection on small-town life in northwestern South Dakota, the harsh climate and prairie landscape of the High Plains, and her own spiritual awakening there—was accepted for publication that October and revised during that year. “Holy Week was amazing,” Norris said. “I heard from my editor on Maundy Thursday that I needed to cut the manuscript from 400 to 300 pages. I went back and started cutting between participating in the Triduum liturgies of Good Friday and the Easter Vigil. Two weeks later, I had cut 99 pages and the manuscript was complete.” Dakota went on to become a New York Times Best Seller and Notable Book of the Year, while Norris went on to become one of our nation’s most respected writers and a close friend of Saint John’s. Her journey as an author has been closely intertwined with the Benedictines of both Assumption Abbey in North Dakota and Saint John’s. After living for more than two decades on her grandmother’s farm in Lemmon, South Dakota, with her late husband, the poet David Dwyer, Norris now lives where she grew up, in Hawaii. She sat down to talk

with me on a chilly November day last fall, swathed against the unaccustomed cold in layers of SJU clothing. She was on her third Collegeville Institute residency. The draw for Norris has been, from the beginning, the monastic community and the ability to pray the Liturgy of the Hours daily with the monks in the Abbey Church. Norris first met Benedictines in 1982, when the Presbyterian minister in Lemmon recommended she visit Assumption Abbey in Richardton, North Dakota. In 1986, she became an Oblate of that community, a layperson who commits to live according to the Rule of Benedict in her daily life and attaches herself to a community of Benedictines.

Kathleen Norris first came to Saint John’s to write at a place where she could also pray the Liturgy of the Hours daily with the monks in the Abbey Church. More than twenty years and four best-sellers later, Norris reflects on why she keeps coming back.