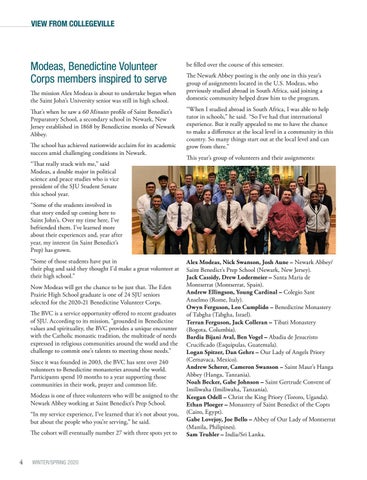 Modeas, Benedictine Volunteer Corps members inspired to serve The mission Alex Modeas is about to undertake began when the Saint John’s University senior was still in high school. That’s when he saw a 60 Minutes profile of Saint Benedict’s Preparatory School, a secondary school in Newark, New Jersey established in 1868 by Benedictine monks of Newark Abbey. The school has achieved nationwide acclaim for its academic success amid challenging conditions in Newark. “That really stuck with me,” said Modeas, a double major in political science and peace studies who is vice president of the SJU Student Senate this school year.

be filled over the course of this semester. The Newark Abbey posting is the only one in this year’s group of assignments located in the U.S. Modeas, who previously studied abroad in South Africa, said joining a domestic community helped draw him to the program. “When I studied abroad in South Africa, I was able to help tutor in schools,” he said. “So I’ve had that international experience. But it really appealed to me to have the chance to make a difference at the local level in a community in this country. So many things start out at the local level and can grow from there.” This year’s group of volunteers and their assignments:

“Some of the students involved in that story ended up coming here to Saint John’s. Over my time here, I’ve befriended them. I’ve learned more about their experiences and, year after year, my interest (in Saint Benedict’s Prep) has grown. “Some of those students have put in their plug and said they thought I’d make a great volunteer at their high school.” Now Modeas will get the chance to be just that. The Eden Prairie High School graduate is one of 24 SJU seniors selected for the 2020-21 Benedictine Volunteer Corps. The BVC is a service opportunity offered to recent graduates of SJU. According to its mission, “grounded in Benedictine values and spirituality, the BVC provides a unique encounter with the Catholic monastic tradition, the multitude of needs expressed in religious communities around the world and the challenge to commit one’s talents to meeting those needs.” Since it was founded in 2003, the BVC has sent over 240 volunteers to Benedictine monasteries around the world. Participants spend 10 months to a year supporting those communities in their work, prayer and common life. Modeas is one of three volunteers who will be assigned to the Newark Abbey working at Saint Benedict’s Prep School. “In my service experience, I’ve learned that it’s not about you, but about the people who you’re serving,” he said. The cohort will eventually number 27 with three spots yet to