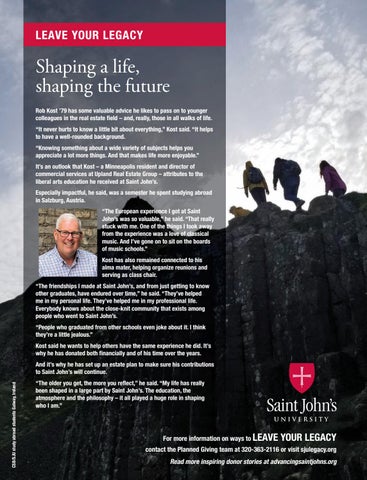 Shaping a life, shaping the future Rob Kost ’79 has some valuable advice he likes to pass on to younger colleagues in the real estate field – and, really, those in all walks of life. “It never hurts to know a little bit about everything,” Kost said. “It helps to have a well-rounded background. “Knowing something about a wide variety of subjects helps you appreciate a lot more things. And that makes life more enjoyable.” It’s an outlook that Kost – a Minneapolis resident and director of commercial services at Upland Real Estate Group – attributes to the liberal arts education he received at Saint John’s. Especially impactful, he said, was a semester he spent studying abroad in Salzburg, Austria. “The European experience I got at Saint John’s was so valuable,” he said. “That really stuck with me. One of the things I took away from the experience was a love of classical music. And I’ve gone on to sit on the boards of music schools.” Kost has also remained connected to his alma mater, helping organize reunions and serving as class chair. “The friendships I made at Saint John’s, and from just getting to know other graduates, have endured over time,” he said. “They’ve helped me in my personal life. They’ve helped me in my professional life. Everybody knows about the close-knit community that exists among people who went to Saint John’s. “People who graduated from other schools even joke about it. I think they’re a little jealous.” Kost said he wants to help others have the same experience he did. It’s why he has donated both financially and of his time over the years.

And it’s why he has set up an estate plan to make sure his contributions to Saint John’s will continue. “The older you get, the more you reflect,” he said. “My life has really been shaped in a large part by Saint John’s. The education, the atmosphere and the philosophy – it all played a huge role in shaping who I am.”

For more information on ways to LEAVE