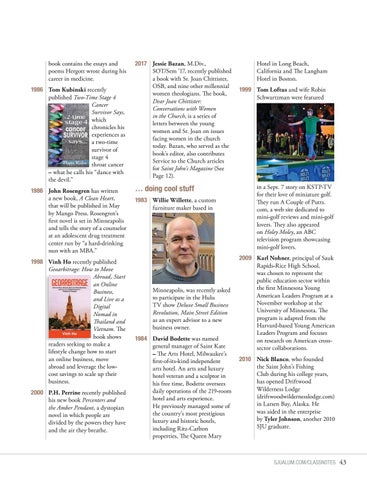 book contains the essays and poems Hergott wrote during his career in medicine. 1986 Tom Kubinski recently published Two-Time Stage 4 Cancer Survivor Says, which chronicles his experiences as a two-time survivor of stage 4 throat cancer – what he calls his “dance with the devil.” 1986 John Rosengren has written a new book, A Clean Heart, that will be published in May by Mango Press. Rosengren’s first novel is set in Minneapolis and tells the story of a counselor at an adolescent drug treatment center run by “a hard-drinking nun with an MBA.” 1998 Vinh Ho recently published Geoarbitrage: How to Move Abroad, Start an Online Business, and Live as a Digital Nomad in Thailand and Vietnam. The book shows readers seeking to make a lifestyle change how to start an online business, move abroad and leverage the lowcost savings to scale up their business. 2000 P.H. Perrine recently published his new book Percenters and the Amber Pendant, a dystopian novel in which people are divided by the powers they have and the air they breathe.

2017 Jessie Bazan, M.Div., SOT/Sem ’17, recently published a book with Sr. Joan Chittister, OSB, and nine other millennial women theologians. The book, Dear Joan Chittister: Conversations with Women in the Church, is a series of letters between the young women and Sr. Joan on issues facing women in the church today. Bazan, who served as the book’s editor, also contributes Service to the Church articles for Saint John’s Magazine (See Page 12).

Minneapolis, was recently asked to participate in the Hulu TV show Deluxe Small Business Revolution, Main Street Edition as an expert advisor to a new business owner. 1984 David Bodette was named general manager of Saint Kate – The Arts Hotel, Milwaukee’s first-of-its-kind independent arts hotel. An arts and luxury hotel veteran and a sculptor in his free time, Bodette oversees daily operations of the 219-room hotel and arts experience. He previously managed some of the country’s most prestigious luxury and historic hotels, including Ritz-Carlton properties, The Queen Mary

Hotel in Long Beach, California and The Langham Hotel in Boston. 1999 Tom Loftus and wife Robin Schwartzman were featured

in a Sept. 7 story on KSTP-TV for their love of miniature golf. They run A Couple of Putts. com, a web site dedicated to mini-golf reviews and mini-golf lovers. They also appeared on Holey Moley, an ABC television program showcasing mini-golf lovers. 2009 Karl Nohner, principal of Sauk Rapids-Rice High School, was chosen to represent the public education sector within the first Minnesota Young American Leaders Program at a November workshop at the University of Minnesota. The program is adapted from the Harvard-based Young American Leaders Program and focuses on research on American crosssector collaborations. 2010 Nick Blanco, who founded the Saint John’s Fishing Club during his college years, has opened Driftwood Wilderness Lodge (driftwoodwildernesslodge.com) in Larsen Bay, Alaska. He was aided in the enterprise by Tyler Johnson, another 2010 SJU graduate.