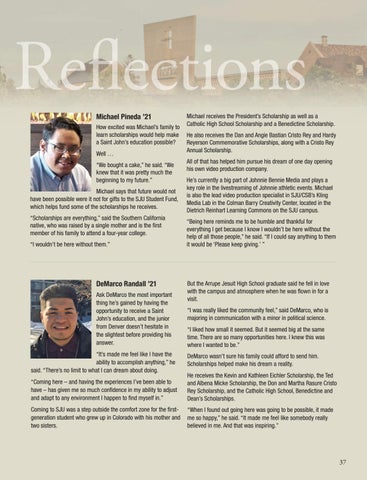 How excited was Michael’s family to learn scholarships would help make a Saint John’s education possible? Well … “We bought a cake,” he said. “We knew that it was pretty much the beginning to my future.” Michael says that future would not have been possible were it not for gifts to the SJU Student Fund, which helps fund some of the scholarships he receives. “Scholarships are everything,” said the Southern California native, who was raised by a single mother and is the first member of his family to attend a four-year college. “I wouldn’t be here without them.”

DeMarco Randall ’21 Ask DeMarco the most important thing he’s gained by having the opportunity to receive a Saint John’s education, and the junior from Denver doesn’t hesitate in the slightest before providing his answer. “It’s made me feel like I have the ability to accomplish anything,” he said. “There’s no limit to what I can dream about doing.

Michael receives the President’s Scholarship as well as a Catholic High School Scholarship and a Benedictine Scholarship. He also receives the Dan and Angie Bastian Cristo Rey and Hardy Reyerson Commemorative Scholarships, along with a Cristo Rey Annual Scholarship. All of that has helped him pursue his dream of one day opening his own video production company. He’s currently a big part of Johnnie Bennie Media and plays a key role in the livestreaming of Johnnie athletic events. Michael is also the lead video production specialist in SJU/CSB’s Kling Media Lab in the Colman Barry Creativity Center, located in the Dietrich Reinhart Learning Commons on the SJU campus. “Being here reminds me to be humble and thankful for everything I get because I know I wouldn’t be here without the help of all those people,” he said. “If I could say anything to them it would be ‘Please keep giving.’ ”

But the Arrupe Jesuit High School graduate said he fell in love with the campus and atmosphere when he was flown in for a visit. “I was really liked the community feel,” said DeMarco, who is majoring in communication with a minor in political science. “I liked how small it seemed. But it seemed big at the same time. There are so many opportunities here. I knew this was where I wanted to be.” DeMarco wasn’t sure his family could afford to send him. Scholarships helped make his dream a reality.

“Coming here – and having the experiences I’ve been able to have – has given me so much confidence in my ability to adjust and adapt to any environment I happen to find myself in.”

Coming to SJU was a step outside the comfort zone for the firstgeneration student who grew up in Colorado with his mother and two sisters.

“When I found out going here was going to be possible, it made me so happy,” he said. “It made me feel like somebody really believed in me. And that was inspiring.”