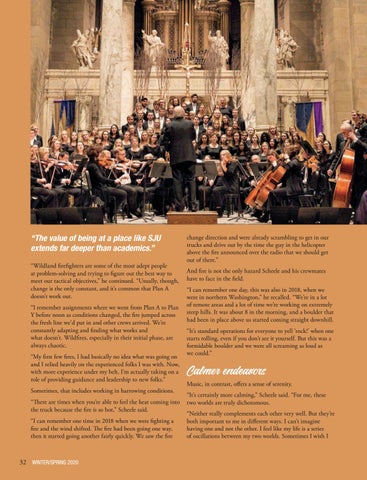 “The value of being at a place like SJU extends far deeper than academics.” “Wildland firefighters are some of the most adept people at problem-solving and trying to figure out the best way to meet our tactical objectives,” he continued. “Usually, though, change is the only constant, and it&#39;s common that Plan A doesn&#39;t work out. “I remember assignments where we went from Plan A to Plan Y before noon as conditions changed, the fire jumped across the fresh line we’d put in and other crews arrived. We’re constantly adapting and finding what works and what doesn’t. Wildfires, especially in their initial phase, are always chaotic. “My first few fires, I had basically no idea what was going on and I relied heavily on the experienced folks I was with. Now, with more experience under my belt, I&#39;m actually taking on a role of providing guidance and leadership to new folks.” Sometimes, that includes working in harrowing conditions. “There are times when you’re able to feel the heat coming into the truck because the fire is so hot,” Scheele said. “I can remember one time in 2018 when we were fighting a fire and the wind shifted. The fire had been going one way, then it started going another fairly quickly. We saw the fire

change direction and were already scrambling to get in our trucks and drive out by the time the guy in the helicopter above the fire announced over the radio that we should get out of there.” And fire is not the only hazard Scheele and his crewmates have to face in the field. “I can remember one day, this was also in 2018, when we were in northern Washington,” he recalled. “We’re in a lot of remote areas and a lot of time we’re working on extremely steep hills. It was about 8 in the morning, and a boulder that had been in place above us started coming straight downhill. “It’s standard operations for everyone to yell ‘rock!’ when one starts rolling, even if you don’t see it yourself. But this was a formidable boulder and we were all screaming as loud as we could.”

Calmer endeavors Music, in contrast, offers a sense of serenity. “It’s certainly more calming,” Scheele said. “For me, these two worlds are truly dichotomous. “Neither really complements each other very well. But they’re both important to me in different ways. I can’t imagine having one and not the other. I feel like my life is a series of oscillations between my two worlds. Sometimes I wish I