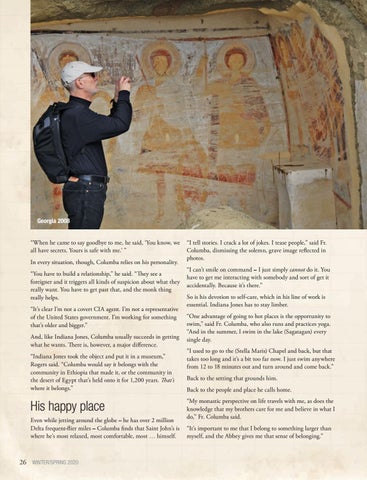 Georgia 2008 “When he came to say goodbye to me, he said, ‘You know, we all have secrets. Yours is safe with me.’ ” In every situation, though, Columba relies on his personality. “You have to build a relationship,” he said. “They see a foreigner and it triggers all kinds of suspicion about what they really want. You have to get past that, and the monk thing really helps. “It’s clear I’m not a covert CIA agent. I’m not a representative of the United States government. I’m working for something that’s older and bigger.” And, like Indiana Jones, Columba usually succeeds in getting what he wants. There is, however, a major difference. “Indiana Jones took the object and put it in a museum,” Rogers said. “Columba would say it belongs with the community in Ethiopia that made it, or the community in the desert of Egypt that’s held onto it for 1,200 years. That’s where it belongs.”

His happy place Even while jetting around the globe – he has over 2 million Delta frequent-flier miles – Columba finds that Saint John’s is where he’s most relaxed, most comfortable, most … himself.

“I tell stories. I crack a lot of jokes. I tease people,” said Fr. Columba, dismissing the solemn, grave image reflected in photos. “I can’t smile on command – I just simply cannot do it. You have to get me interacting with somebody and sort of get it accidentally. Because it’s there.” So is his devotion to self-care, which in his line of work is essential. Indiana Jones has to stay limber. “One advantage of going to hot places is the opportunity to swim,” said Fr. Columba, who also runs and practices yoga. “And in the summer, I swim in the lake (Sagatagan) every single day. “I used to go to the (Stella Maris) Chapel and back, but that takes too long and it’s a bit too far now. I just swim anywhere from 12 to 18 minutes out and turn around and come back.” Back to the setting that grounds him. Back to the people and place he calls home. “My monastic perspective on life travels with me, as does the knowledge that my brothers care for me and believe in what I do,” Fr. Columba said. “It’s important to me that I belong to something larger than myself, and the Abbey gives me that sense of belonging.”