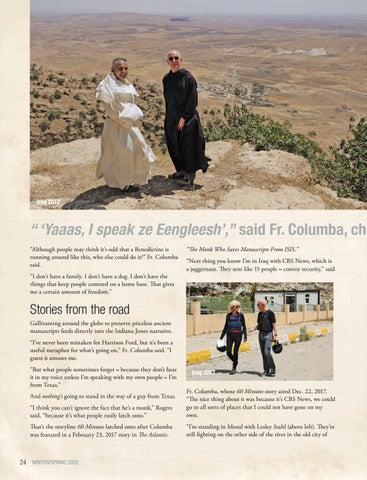 “ ‘Yaaas, I speak ze Eengleesh’,” said Fr. Columba, ch “Although people may think it’s odd that a Benedictine is running around like this, who else could do it?” Fr. Columba said. “I don’t have a family. I don’t have a dog. I don’t have the things that keep people centered on a home base. That gives me a certain amount of freedom.”

“The Monk Who Saves Manuscripts From ISIS.” “Next thing you know I’m in Iraq with CBS News, which is a juggernaut. They sent like 15 people – convoy security,” said

Stories from the road Gallivanting around the globe to preserve priceless ancient manuscripts feeds directly into the Indiana Jones narrative. “I’ve never been mistaken for Harrison Ford, but it’s been a useful metaphor for what’s going on,” Fr. Columba said. “I guess it amuses me. “But what people sometimes forget – because they don’t hear it in my voice unless I’m speaking with my own people – I’m from Texas.”

“I think you can’t ignore the fact that he’s a monk,” Rogers said, “because it’s what people easily latch onto.”

Fr. Columba, whose 60 Minutes story aired Dec. 22, 2017. “The nice thing about it was because it’s CBS News, we could go to all sorts of places that I could not have gone on my own.

That’s the storyline 60 Minutes latched onto after Columba was featured in a February 23, 2017 story in The Atlantic:

“I’m standing in Mosul with Lesley Stahl (above left). They’re still fighting on the other side of the river in the old city of

And nothing’s going to stand in the way of a guy from Texas.