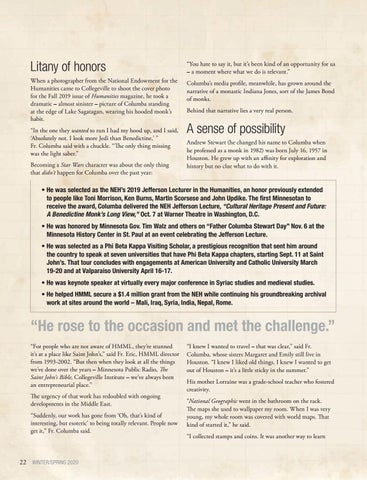 “You hate to say it, but it’s been kind of an opportunity for us – a moment where what we do is relevant.”

When a photographer from the National Endowment for the Humanities came to Collegeville to shoot the cover photo for the Fall 2019 issue of Humanities magazine, he took a dramatic – almost sinister – picture of Columba standing at the edge of Lake Sagatagan, wearing his hooded monk’s habit.

Columba’s media profile, meanwhile, has grown around the narrative of a monastic Indiana Jones, sort of the James Bond of monks.

“In the one they wanted to run I had my hood up, and I said, ‘Absolutely not. I look more Jedi than Benedictine,’ ” Fr. Columba said with a chuckle. “The only thing missing was the light saber.” Becoming a Star Wars character was about the only thing that didn’t happen for Columba over the past year:

Behind that narrative lies a very real person.

A sense of possibility Andrew Stewart (he changed his name to Columba when he professed as a monk in 1982) was born July 16, 1957 in Houston. He grew up with an affinity for exploration and history but no clue what to do with it.

• He was selected as the NEH’s 2019 Jefferson Lecturer in the Humanities, an honor previously extended to people like Toni Morrison, Ken Burns, Martin Scorsese and John Updike. The first Minnesotan to receive the award, Columba delivered the NEH Jefferson Lecture, “Cultural Heritage Present and Future: A Benedictine Monk’s Long View,” Oct. 7 at Warner Theatre in Washington, D.C. • He was honored by Minnesota Gov. Tim Walz and others on “Father Columba Stewart Day” Nov. 6 at the Minnesota History Center in St. Paul at an event celebrating the Jefferson Lecture. • He was selected as a Phi Beta Kappa Visiting Scholar, a prestigious recognition that sent him around the country to speak at seven universities that have Phi Beta Kappa chapters, starting Sept. 11 at Saint John’s. That tour concludes with engagements at American University and Catholic University March 19-20 and at Valparaiso University April 16-17. • He was keynote speaker at virtually every major conference in Syriac studies and medieval studies. • He helped HMML secure a $1.4 million grant from the NEH while continuing his groundbreaking archival work at sites around the world – Mali, Iraq, Syria, India, Nepal, Rome.

“He rose to the occasion and met the challenge.” “For people who are not aware of HMML, they’re stunned it’s at a place like Saint John’s,” said Fr. Eric, HMML director from 1993-2002. “But then when they look at all the things we’ve done over the years – Minnesota Public Radio, The Saint John’s Bible, Collegeville Institute – we’ve always been an entrepreneurial place.” The urgency of that work has redoubled with ongoing developments in the Middle East. “Suddenly, our work has gone from ‘Oh, that’s kind of interesting, but esoteric’ to being totally relevant. People now get it,” Fr. Columba said.

“I knew I wanted to travel – that was clear,” said Fr. Columba, whose sisters Margaret and Emily still live in Houston. “I knew I liked old things. I knew I wanted to get out of Houston – it’s a little sticky in the summer.” His mother Lorraine was a grade-school teacher who fostered creativity. “National Geographic went in the bathroom on the rack. The maps she used to wallpaper my room. When I was very young, my whole room was covered with world maps. That kind of started it,” he said. “I collected stamps and coins. It was another way to learn