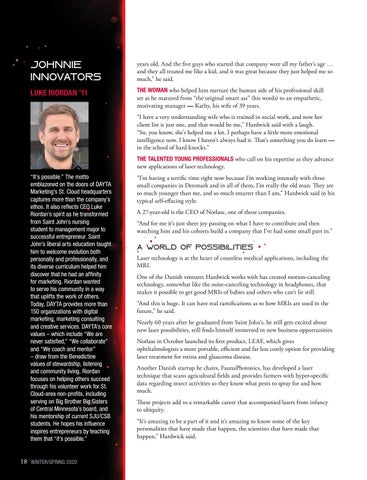 years old. And the five guys who started that company were all my father’s age … and they all treated me like a kid, and it was great because they just helped me so much,” he said.

THE WOMAN who helped him nurture the human side of his professional skill set as he matured from “the original smart ass” (his words) to an empathetic, motivating manager — Kathy, his wife of 39 years. “I have a very understanding wife who is trained in social work, and now her client list is just one, and that would be me,” Hardwick said with a laugh. “So, you know, she’s helped me a lot. I perhaps have a little more emotional intelligence now. I know I haven’t always had it. That’s something you do learn — in the school of hard knocks.” THE TALENTED YOUNG PROFESSIONALS who call on his expertise as they advance new applications of laser technology.

“It’s possible.” The motto emblazoned on the doors of DAYTA Marketing’s St. Cloud headquarters captures more than the company’s ethos. It also reflects CEO Luke Riordan’s spirit as he transformed from Saint John’s nursing student to management major to successful entrepreneur. Saint John’s liberal arts education taught him to welcome evolution both personally and professionally, and its diverse curriculum helped him discover that he had an affinity for marketing. Riordan wanted to serve his community in a way that uplifts the work of others. Today, DAYTA provides more than 150 organizations with digital marketing, marketing consulting and creative services. DAYTA’s core values – which include “We are never satisfied,” “We collaborate” and “We coach and mentor” – draw from the Benedictine values of stewardship, listening and community living. Riordan focuses on helping others succeed through his volunteer work for St. Cloud-area non-profits, including serving on Big Brother Big Sisters of Central Minnesota’s board, and his mentorship of current SJU/CSB students. He hopes his influence inspires entrepreneurs by teaching them that “it’s possible.”

“I’m having a terrific time right now because I’m working intensely with three small companies in Denmark and in all of them, I’m really the old man. They are so much younger than me, and so much smarter than I am,” Hardwick said in his typical self-effacing style. A 27-year-old is the CEO of Norlase, one of those companies. “And for me it’s just sheer joy passing on what I have to contribute and then watching him and his cohorts build a company that I’ve had some small part in.”

A world of possibilities Laser technology is at the heart of countless medical applications, including the MRI. One of the Danish ventures Hardwick works with has created motion-canceling technology, somewhat like the noise-canceling technology in headphones, that makes it possible to get good MRIs of babies and others who can’t lie still. “And this is huge. It can have real ramifications as to how MRIs are used in the future,” he said. Nearly 60 years after he graduated from Saint John’s, he still gets excited about new laser possibilities, still finds himself immersed in new business opportunities. Norlase in October launched its first product, LEAF, which gives ophthalmologists a more portable, efficient and far less costly option for providing laser treatment for retina and glaucoma disease. Another Danish startup he chairs, FaunaPhotonics, has developed a laser technique that scans agricultural fields and provides farmers with hyper-specific data regarding insect activities so they know what pests to spray for and how much. These projects add to a remarkable career that accompanied lasers from infancy to ubiquity. “It’s amazing to be a part of it and it’s amazing to know some of the key personalities that have made that happen, the scientists that have made that happen,” Hardwick said.