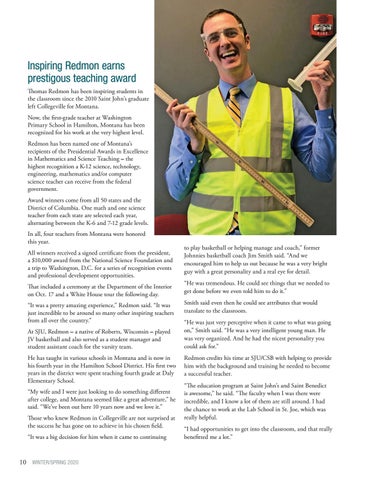 Inspiring Redmon earns prestigous teaching award Thomas Redmon has been inspiring students in the classroom since the 2010 Saint John’s graduate left Collegeville for Montana. Now, the first-grade teacher at Washington Primary School in Hamilton, Montana has been recognized for his work at the very highest level. Redmon has been named one of Montana’s recipients of the Presidential Awards in Excellence in Mathematics and Science Teaching – the highest recognition a K-12 science, technology, engineering, mathematics and/or computer science teacher can receive from the federal government. Award winners come from all 50 states and the District of Columbia. One math and one science teacher from each state are selected each year, alternating between the K-6 and 7-12 grade levels. In all, four teachers from Montana were honored this year. All winners received a signed certificate from the president, a $10,000 award from the National Science Foundation and a trip to Washington, D.C. for a series of recognition events and professional development opportunities. That included a ceremony at the Department of the Interior on Oct. 17 and a White House tour the following day. “It was a pretty amazing experience,” Redmon said. “It was just incredible to be around so many other inspiring teachers from all over the country.” At SJU, Redmon – a native of Roberts, Wisconsin – played JV basketball and also served as a student manager and student assistant coach for the varsity team. He has taught in various schools in Montana and is now in his fourth year in the Hamilton School District. His first two years in the district were spent teaching fourth grade at Daly Elementary School. “My wife and I were just looking to do something different after college, and Montana seemed like a great adventure,” he said. “We’ve been out here 10 years now and we love it.” Those who knew Redmon in Collegeville are not surprised at the success he has gone on to achieve in his chosen field. “It was a big decision for him when it came to continuing

to play basketball or helping manage and coach,” former Johnnies basketball coach Jim Smith said. “And we encouraged him to help us out because he was a very bright guy with a great personality and a real eye for detail. “He was tremendous. He could see things that we needed to get done before we even told him to do it.” Smith said even then he could see attributes that would translate to the classroom. “He was just very perceptive when it came to what was going on,” Smith said. “He was a very intelligent young man. He was very organized. And he had the nicest personality you could ask for.” Redmon credits his time at SJU/CSB with helping to provide him with the background and training he needed to become a successful teacher. “The education program at Saint John’s and Saint Benedict is awesome,” he said. “The faculty when I was there were incredible, and I know a lot of them are still around. I had the chance to work at the Lab School in St. Joe, which was really helpful. “I had opportunities to get into the classroom, and that really benefitted me a lot.”