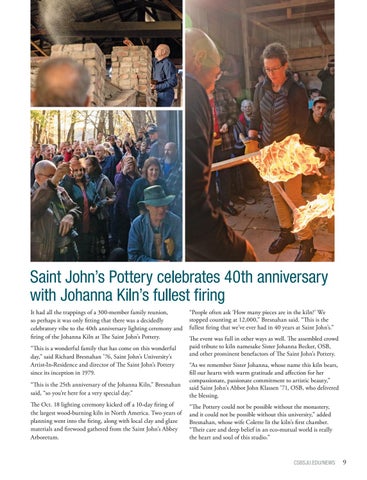 “People often ask ‘How many pieces are in the kiln?’ We stopped counting at 12,000,” Bresnahan said. “This is the fullest firing that we’ve ever had in 40 years at Saint John’s.” The event was full in other ways as well. The assembled crowd paid tribute to kiln namesake Sister Johanna Becker, OSB, and other prominent benefactors of The Saint John’s Pottery.

“This is the 25th anniversary of the Johanna Kiln,” Bresnahan said, “so you’re here for a very special day.”

“As we remember Sister Johanna, whose name this kiln bears, fill our hearts with warm gratitude and affection for her compassionate, passionate commitment to artistic beauty,” said Saint John’s Abbot John Klassen ’71, OSB, who delivered the blessing.

The Oct. 18 lighting ceremony kicked off a 10-day firing of the largest wood-burning kiln in North America. Two years of planning went into the firing, along with local clay and glaze materials and firewood gathered from the Saint John’s Abbey Arboretum.