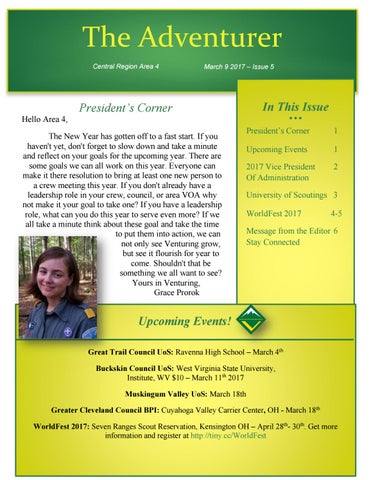 Hello Area 4, The New Year has gotten off to a fast start. If you haven't yet, don't forget to slow down and take a minute and reflect on your goals for the upcoming year. There are some goals we can all work on this year. Everyone can make it there resolution to bring at least one new person to a crew meeting this year. If you don't already have a leadership role in your crew, council, or area VOA why not make it your goal to take one? If you have a leadership role, what can you do this year to serve even more? If we all take a minute think about these goal and take the time to put them into action, we can not only see Venturing grow, but see it flourish for year to come. Shouldn't that be something we all want to see? Yours in Venturing, Grace Prorok

Message from the Editor 6 Stay Connected

2017 Vice President of Administration Colin Wadsworth started his scout career in the 1st grade with Cub Scouts. From there he has been moving up the ranks from Tiger scout to Eagle Scout and currently working on getting his Summit Award. He is currently a member of Crew 2143 out of Avon Lake, Ohio. While in Boy Scout troop 334 he served as the Leave No Trace Trainer and a patrol leader. He is also part of the Heart of Ohio/GCC VOA where is Vice President. He has had many scouting experiences throughout the years. These include Jambo in 2013, Philmont in 2015, serving on staff at Gilwell scout park last summer and his Eagle scout project of putting 2 new 3D printers in his local high school. His staff experiences come from 2 summers at Firelands Scout camp and 1 summer at Gilwell park in London, England. The trainings he has completed are Wilderness First Aid training, time management and goal setting, introduction to leadership for officers, and Project Management. Colin is currently a junior at Avon Lake High School where he focuses on engineering. Colin is part of the Avon Lake Track and Field, Avon Lake Cross Country and Hilltoppers cross country skiing, National Honors Society, PLTW an engineering program offered through the JVS, and Model UN. In his free time he enjoys outdoor activities like backpacking to computer activities like gaming or research. The main goal Colin has for scouts is for every venture scout to have the same opportunities that he had had and grow the program to the best it can possibly be. He is excited to serve as V.P of administration in order to serve the scouts of Area 4.

WorldFest 2017: Through The Ages 

WorldFest is Area 4’s annual fun event that began with WorldFest 2015: an International Experience, and has been a huge success since. Last year we had nearly 500 Venturers at WorldFest 2016: Pirates of the Seven Ranges who participated in fun things such as shooting sports, knife throwing, inflatables, COPE, a rock wall, nightly dance parties, and so much more. On top of all the exciting activities, and I believe the attendees last year would agree, that the food was great and the cooks did a fantastic job. The theme for WorldFest 2017 is WorldFest Through the Ages! Going along with our theme crews will be able to dress up in any decade of their choice for the Saturday night dance. We will include many of the same events as last year plus many new ones. Areas of the Range will be set up to represent different decades, along with some of the fun activities. WorldFest is a great experience where you will get to enjoy not only the many activities and fantastic food, but also make memories with scouts from all over. We hope to see you all at WorldFest 2017! Get more information and register at http://tiny.cc/WorldFest Contact WorldFest@CRVenturing.org to Join Staff or for any Questions.

Message from the Editor

Hello Venturers! Hard to believe the year is almost over! I hope everyone had a Merry Christmas and a Happy New Year. I had a blast at the Area 4 Leadership and Planning Conference. The trainings were a success and we heard many good ideas that can be incorporated into WorldFest. Follow our Area pages to keep up with upcoming events and all things Venturing. I’m looking forward to rest of my term and meeting you all at WorldFest! Yours in Venturing, Cierra Beatty Area4vp-Communications@CRVenturing.org 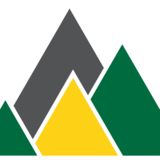 Area 4 is in the states of Ohio and West Virginia

Area 4 is in the states of Ohio and West Virginia