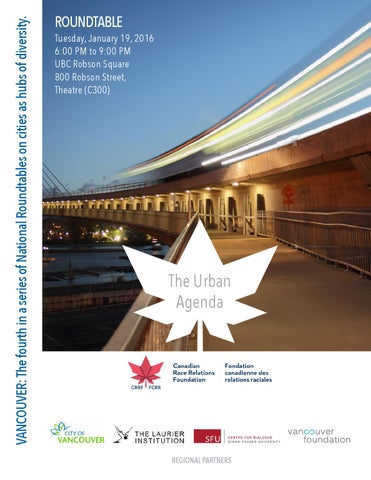 VANCOUVER: The fourth in a series of National Roundtables on cities as hubs of diversity.

LETTER FROM THE MAYOR January, 2016

A Message from the Mayor On behalf of Vancouver City Council, I want to welcome you to the Canadian Race Relations Foundation's "The Urban Agenda: Vancouver," a timely discussion on diversity and race relations. In the midst of one of the largest refugee settlement initiatives in Canadian history, it is important that we come together to find ways to build and strengthen our communities, and ensure our city is inclusive and respectful of differences. Vancouver and communities across Canada have a longstanding commitment to welcoming refugees and their families in times of need, and the recent outpouring of support for Syrian refugees reminds us that kindness and compassion are hallmarks of our city. I know that recent events have sparked many conversations in our homes, schools, workplaces and places of worship about racism, about difference and what it means to be welcoming. This roundtable provides an important venue for advancing discussions on racism and discrimination and we would like to thank the Canadian Race Relations Foundation and regional partners, SFU Centre for Dialogue and The Laurier Institution, for hosting this event. In recent years, the City has worked on a number of projects and initiatives to foster diversity and inclusion in our community. Actions include an annual commemoration of the International Day for the Elimination of Racial Discrimination, as well as a number of public forums on racism related issues and the welcoming of refugees and immigrants to our city. The Cityâ&#x20AC;&#x2122;s Multicultural Advisory Committee continues to provide invaluable advice to Council on enhancing inclusion for Vancouver's diverse cultural communities and ensuring full participate in City services and civic life, while initiatives such as the Welcoming Communities Project and the Vancouver Immigrant Partnership have sought to foster a strong sense of welcoming and belonging for newcomers. As the cityâ&#x20AC;&#x2122;s population continues to diversify and evolve so too will our initiatives as we continue to develop innovative policies, practices, and engagement processes to foster inclusiveness and deepen belonging. Yours truly,

he Canadian Race Relations Foundation held a series of Roundtables across Canada. CRRF Roundtables bring together people who are engaged in the ongoing dialogue about race relations and multiculturalism in Canada. They build on our collective knowledge and understanding, and generate new ideas for deeper exploration.

In each city, a panel of distinguished thought leaders present their perspective with an emphasis on the challenges and promises of multiculturalism. After the presentations, responders are invited to put forward their thoughts and questions. The proceedings also include a Q&A open to all attendees.

CRRF Roundtables focus on present-day issues of direct relevance to the CRRF’s mandate and strategic priorities. They provide a vibrant forum for a broad range of experts to convene and discuss pressing topics, exchange knowledge and expertise, and to craft practical recommendations for addressing challenges and maximizing opportunities. They are organized in partnership with community stakeholders across the country and are open to the public at no cost.

The Canadian Race Relations Foundation documents each Roundtable as an exploration of Canadian values through culture, faith and identity. A final culminating report and short documentary will be featured as part of the CRRF’s celebration of Canada’s sesquicentennial in 2017.

In 2015, the CRRF launched the six-city series, “The Urban Agenda: Race Relations and Multiculturalism in Canadian Cities” to celebrate the individual and collective success of Canadian cities as hubs of diversity and models of inclusion, while exploring issues that remain unresolved and identifying emerging challenges.

Roundtables are open to the public, and are of interest to people working in the field of diversity and inclusion, actively engaged in discussions about multiculturalism, and/or citybuilding and urban studies.

MASTER OF CEREMONIES Farid Rohani, Chair of the Board of Directors, the Laurier Institution

MODERATOR Kory Wilson: Executive Director, Aboriginal Initiatives & Partnerships, British Columbia Institute of Technology. Kory is Musgamagw Tsawataineuk and Laich-Kwil-Tach, which are both part of the Kwakwaka’wakw Nation. She is also a mother and member of the We Wai Kai Nation. Kory is committed to education, both within institutions and the community, and is dedicated to the success of Indigenous people.

PANELLISTS Vi Nguyen: Director, Grants & Community Initiatives, Vancouver Foundation. Vi has spent the majority of her career working with newcomer and Aboriginal youth and families in community development settings with Vancouver Parks Board, City of Vancouver, Pacific Community Resources’ Broadway Youth Resource Centre and the United Nations International Labour Organization. She is currently overseeing the Fresh Voices Initiative, working to engage immigrant and refugee youth in shaping policies and programs that affect their participation and sense of belonging in B.C. Jennifer Reddy: Community Connections & Youth Coordinator, Settlement Workers in Schools Program, Vancouver School Board. Jennifer aims to engage in meaningful dialogue, and encourage the development of ideas that result in creative solutions to complex issues. Her experience includes working with the Canadian Red Cross and the Centre for Democratic Development in Ghana, Krypa and Manavya in India. Shauna Sylvester: Professor, Professional Practice, the Director of the Simon Fraser University’s Centre for Dialogue and the Executive Director of the SFU Public Square. Shauna is an award-winning social entrepreneur, a skilled facilitator and a commentator on urban and international issues. She has founded a number of organizations including Carbon Talks and Renewable Cities, Canada’s World, and IMPACS (Institute for Media, Policy and Civil Society). Douglas Todd: Reporter and blogger, Vancouver Sun. Douglas explores issues such as religion, politics, immigration, diversity and sex ethics. While he was raised in a family of atheists, Douglas has become one of the most decorated spirituality and ethics writers in North America. He has won more than 35 journalistic and educational honours, and was short-listed for 30 more for his work on faith-related issues. 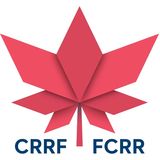