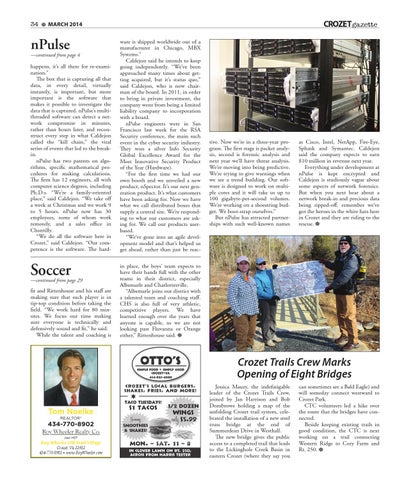 happens, it’s all there for re-examination.” The box that is capturing all that data, in every detail, virtually instantly, is important, but more important is the software that makes it possible to investigate the data that is captured. nPulse’s multithreaded software can detect a network compromise in minutes, rather than hours later, and reconstruct every step in what Caldejon called the “kill chain,” the vital series of events that led to the breakin. nPulse has two patents on algorithms, specific mathematical procedures for making calculations. The firm has 12 engineers, all with computer science degrees, including Ph.D.s. “We’re a family-oriented place,” said Caldejon. “We take off a week at Christmas and we work 9 to 5 hours. nPulse now has 30 employees, some of whom work remotely, and a sales office in Chantilly. “We do all the software here in Crozet,” said Caldejon. “Our competence is the software. The hard-

fit and Rittenhouse and his staff are making sure that each player is in tip-top condition before taking the field. “We work hard for 80 minutes. We focus our time making sure everyone is technically and defensively sound and fit,” he said. While the talent and coaching is

ware is shipped worldwide out of a manufacturer in Chicago, MBX Systems.” Caldejon said he intends to keep going independently. “We’ve been approached many times about getting acquired, but it’s status quo,” said Caldejon, who is now chairman of the board. In 2011, in order to bring in private investment, the company went from being a limited liability company to incorporation with a board. nPulse engineers were in San Francisco last week for the RSA Security conference, the main such event in the cyber security industry. They won a silver Info Security Global Excellence Award for the Most Innovative Security Product of the Year (Hardware). “For the first time we had our own booth and we unveiled a new product, nSpector. It’s our next generation product. It’s what customers have been asking for. Now we have what we call distributed boxes that supply a central site. We’re responding to what our customers are asking for. We call our products userbased. “We’ve gone into an agile development model and that’s helped us get ahead, rather than just be reac-

tive. Now we’re in a three-year program. The first stage is packet analysis, second is forensic analysis and next year we’ll have threat analysis. We’re moving into being predictive. We’re trying to give warnings when we see a trend building. Our software is designed to work on multiple cores and it will take us up to 100 gigabyte-per-second volumes. We’re working on a shoestring budget. We boot-strap ourselves.” But nPulse has attracted partnerships with such well-known names

as Cisco, Intel, NetApp, Fire-Eye, Splunk and Symantec. Caldejon said the company expects to earn $10 million in revenue next year. Everything under development at nPulse is kept encrypted and Caldejon is studiously vague about some aspects of network forensics. But when you next hear about a network break-in and precious data being ripped-off, remember we’ve got the heroes in the white hats here in Crozet and they are riding to the rescue.

in place, the boys’ team expects to have their hands full with the other teams in their district, especially Albemarle and Charlottesville. “Albemarle joins our district with a talented team and coaching staff. CHS is also full of very athletic, competitive players. We have learned enough over the years that anyone is capable, so we are not looking past Fluvanna or Orange either,” Rittenhouse said.

Jessica Mauzy, the indefatigable leader of the Crozet Trails Crew, joined by Jan Harrison and Bob Dombrowe holding a map of the unfolding Crozet trail system, celebrated the installation of a new steel truss bridge at the end of Summerdean Drive in Westhall. The new bridge gives the public access to a completed trail that leads to the Lickinghole Creek Basin in eastern Crozet (where they say you

can sometimes see a Bald Eagle) and will someday connect westward to Crozet Park. CTC volunteers led a hike over the route that the bridges have connected. Beside keeping existing trails in good condition, the CTC is next working on a trail connecting Western Ridge to Cory Farm and Rt. 250. 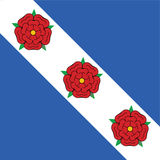