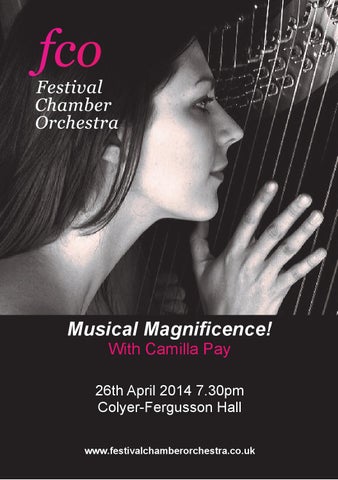 Camilla Pay - Harp Camilla Pay has a wonderfully varied career as a harpist. Since her studies at the Royal Academy of Music, she has performed with orchestras including the Royal Philharmonic Orchestra, Trondheim Symphony Orchestra and Ulster Orchestra but is also equally at home in the studio and on the concert platform for artists as diverse as Beyonce, Michael Buble, Barry Manilow and The Killers. Her love for music began at an early age at Kingâ&amp;#x20AC;&amp;#x2122;s School Canterbury, she was twice overall winner at the Kent Festival, regional finalist in the BBC Young Musician of the Year and finalist in the World Harp Festival. In 1997, she was awarded the Craxton Memorial Award and an entrance scholarship to the Royal Academy of Music, where she graduated with honours, on a Bachelor of music degree. There, she studied with acclaimed harpists, Skaila Kanga and Daphne Boden. Chamber music also forms large part of her career with The Arion Duo (flute and harp) and The Korros Ensemble, a unique and beautiful combination of flute, (Eliza Marshall) clarinet, (Nicholas Ellis) and harp. She has appeared on many television shows, including The Jonathan Ross Show, Later with Jools Holland, The X factor and in the house band for Popstar to Operastar. She has given solo performances throughout the UK in venues such as St Davidâ&amp;#x20AC;&amp;#x2122;s Hall and Canterbury Cathedral, as well as with her very active chamber music groups. Most recently she has been the harpist for the west-end show &#39;A Chorus Line&#39; at the London Palladium. She has also been playing with singer Ellie Goulding on radio, television and live shows. Camilla also teaches harp at Godolphin and Latymer School in Hammersmith.

Enjoy Chamber Music? Why not join our Friends of the FCO email list www.festivalchamberorchestra.co.uk It is free to join, and you can unsubscribe whenever you choose.

One year after the premiere of The Barber of Seville Rossini was commissioned by the Teatro Valle in Rome and given a tentative deadline of December 26, 1816. By December 23 1816, there was still no libretto. On that cold winter evening, Rossini met with librettist Jacopo Ferretti. As Rossini and Ferretti drank tea, Ferretti proposed over twenty subjects, but Rossini rejected each claiming they were too serious, complicated, expensive, or not suitable for the cast which had already been hired. Rossini had already gone to bed when Ferretti murmured “Cinderella.” Rossini stirred at the mention and asked, “Would you have the courage to write me a Cinderella?&quot; Ferretti responded, &quot;Would you have the courage to set it to music?&quot; Ferretti went home and, as promised, had an outline by the following morning. Twenty-two days later he completed the libretto, and Rossini composed the music in only twenty-four days. La Cenerentola premiered on January 25, 1817, one month following its initial conception. Everyone was nervous on opening night. The singers were exhausted and in poor voice, and the performance was not received well. In spite of the criticism, Rossini was optimistic saying, &quot;Fools! Before Carnival ends, everyone will be enamoured of it. Within two years it will please France and be considered a marvel in England.&quot; and Rossini&#39;s predictions proved to be completely correct.

This piece is originally by Turlough O&#39;Carolan (1670-1738) a blind early Irish harpist, composer and singer whose great fame was due to his gift for melodic composition. Before his death, he was said to have called for his harp and played this - his last tune. Michael McGlynn has arranged this traditional Gaelic harp piece, and dedicated it to the memory of Derek Bell of Chieftans fame, and great friend of the Crowther Wind Quintet, who died in 2002.

One of only two true double concertos that Mozart wrote, as well as the only piece of music that he wrote that contains the harp. The central slow movement must surely be one of the most glorious melodies not just in Mozartâ&amp;#x20AC;&amp;#x2122;s output but, possibly, in all music. Written in April of 1778, during Mozartâ&amp;#x20AC;&amp;#x2122;s six-month sojourn in Paris with his mother. It was commissioned by the Duc de Guines, a flutist, for his use and for that of his older daughter, a harpist, who was taking composition lessons from the composer. Mozart stated in a letter to his father that he thought the duke played the flute &quot;extremely well,&quot; and that Marie played the harp &quot;magnifique.&quot; As a composition student, however, Mozart found Marie thoroughly inept. The Duke, an aristocrat Mozart came to despise, never paid the composer for this work. . In the classical period, the harp was still in development, and was not considered a standard orchestral instrument. It was regarded more as a plucked piano. Therefore, harp and flute was considered an extremely unusual combination. The piece is essentially in the form of a Sinfonia Concertante, which was very popular in Paris at the time.

Programme Notes L. van Beethoven 1770-1827 Symphony No. 5 in C minor Op 67 Written in 1804-1808 this is one of the bestknown compositions in classical music, and one of the most frequently played symphonies. First performed in Vienna&#39;s Theater an der Wien in 1808, the work achieved its prodigious reputation

soon afterwards. The symphony, and the four-note opening motif in particular, are well known worldwide, with the motif appearing frequently in popular culture, from disco to rock and roll, to appearances in film and television. The Fifth Symphony had a long gestation. The first sketches date from 1804 following the completion of the Third Symphony. However, Beethoven repeatedly interrupted his work on the Fifth to prepare other compositions, Beethoven was in his mid-thirties during this time; his personal life was troubled by increasing deafness. In the world at large, the period was marked by the Napoleonic Wars, political turmoil in Austria, and the occupation of Vienna by Napoleon&#39;s troops in 1805. The Fifth Symphony was premiered on 22 December 1808 at a mammoth concert consisting entirely of Beethoven premieres, and directed by Beethoven himself. The concert lasted for more than four hours. The two symphonies appeared in reverse order: the Sixth was played first, and the Fifth appeared in the second half. There was little critical response to the premiere performance. The orchestra did not play well - with only one rehearsal before the concert - and at one point, following a mistake by one of the performers in the Choral Fantasy, Beethoven had to stop the music and start again. The auditorium was extremely cold and the audience was exhausted by the length of the program. However, a year and a half later, publication of the score resulted in a rapturous review The symphony soon acquired its status as a central item in the repertoire. Groundbreaking in terms of both its technical and its emotional impact, the Fifth has had a large influence on composers and music critics, and inspired work by such composers as Brahms, Tchaikovsky (his 4th Symphony in particular) Bruckner, Mahler, and Berlioz.

We look forward to being of assistance