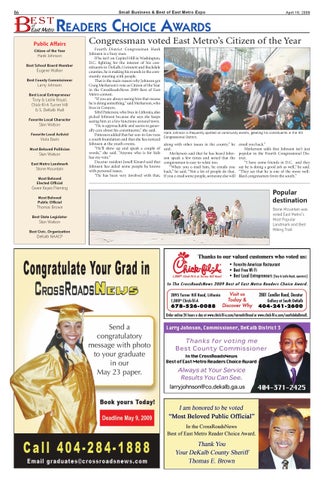 Congressman voted East Metro’s Citizen of the Year Fourth District Congressman Hank Johnson is a busy man. If he isn’t on Capitol Hill in Washington, D.C. fighting for the interest of his constituents in DeKalb, Gwinnett and Rockdale counties, he is making his rounds in the community meeting with people. That is the main reason why Johnson got Craig Merkerson’s vote as Citizen of the Year in the CrossRoadsNews 2009 Best of East Metro contest. “If you are always seeing him that means he is doing something,” said Merkerson, who lives in Conyers. Sibyl Patterson, who lives in Lithonia, also picked Johnson because she says she keeps seeing him at a few functions around town. “He is approachable and seems to generally care about his constituents,” she said. Patterson added that her son-in-law runs a youth foundation and that she has noticed Johnson at the youth events. “He’ll show up and speak a couple of words,” she said. “Anyone who is for kids has my vote.” Decatur resident Jonell Kinard said that Johnson has aided some people he knows with personal issues. “He has been very involved with that,

Hank Johnson is frequently spotted at community events, greeting his constituents in the 4th Congressional District.

along with other issues in the county,” he said. Merkerson said that he has heard Johnson speak a few times and noted that the congressman is easy to relate too. “When you e-mail him, he emails you back,” he said. “Not a lot of people do that. If you e-mail some people, someone else will

email you back.” Merkerson adds that Johnson isn’t just popular in the Fourth Congressional District. “I have some friends in D.C. and they say he is doing a good job as well,” he said. “They say that he is one of the more wellliked congressmen from the south.” 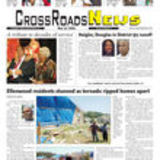