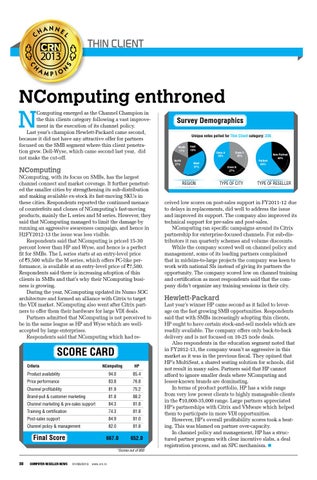 Computing emerged as the Channel Champion in the thin clients category following a vast improvement in the execution of its channel policy. Last year’s champion Hewlett-Packard came second, because it did not have any attractive offer for partners focused on the SMB segment where thin client penetration grew. Dell-Wyse, which came second last year, did not make the cut-off.

NComputing, with its focus on SMBs, has the largest channel connect and market coverage. It further penetrated the smaller cities by strengthening its sub-distribution and making available ex-stock its fast-moving SKUs in these cities. Respondents reported the continued menace of counterfeits and clones of NComputing’s fast-moving products, mainly the L series and M series. However, they said that NComputing managed to limit the damage by running an aggressive awareness campaign, and hence in H2FY2012-13 the issue was less visible. Respondents said that NComputing is priced 15-30 percent lower than HP and Wyse, and hence is a perfect fit for SMBs. The L series starts at an entry-level price of `5,500 while the M series, which offers PC-like performance, is available at an entry-level price of `7,500. Respondents said there is increasing adoption of thin clients in SMBs and that’s why their NComputing business is growing. During the year, NComputing updated its Numo SOC architecture and formed an alliance with Citrix to target the VDI market. NComputing also went after Citrix partners to offer them their hardware for large VDI deals. Partners admitted that NComputing is not perceived to be in the same league as HP and Wyse which are wellaccepted by large enterprises. Respondents said that NComputing which had re-

ceived low scores on post-sales support in FY2011-12 due to delays in replacements, did well to address the issue and improved its support. The company also improved its technical support for pre-sales and post-sales. NComputing ran specific campaigns around its Citrix partnership for enterprise-focused channels. For sub-distributors it ran quarterly schemes and volume discounts. While the company scored well on channel policy and management, some of its leading partners complained that in midsize-to-large projects the company was keen to work with national SIs instead of giving its partners the opportunity. The company scored low on channel training and certification as most respondents said that the company didn’t organize any training sessions in their city.

Last year’s winner HP came second as it failed to leverage on the fast growing SMB opportunities. Respondents said that with SMBs increasingly adopting thin clients, HP ought to have certain stock-and-sell models which are readily available. The company offers only back-to-back delivery and is not focused on 10-25 node deals. Also respondents in the education segment noted that in FY2012-13, the company wasn’t as aggressive in this market as it was in the previous fiscal. They opined that HP’s MultiSeat, a shared seating solution for schools, did not result in many sales. Partners said that HP cannot afford to ignore smaller deals where NComputing and lesser-known brands are dominating. In terms of product portfolio, HP has a wide range from very low power clients to highly manageable clients in the `10,000-35,000 range. Large partners appreciated HP’s partnerships with Citrix and VMware which helped them to participate in more VDI opportunities. However, HP’s overall profitability scores took a beating. This was blamed on partner over-capacity. In channel policy and management, HP has a structured partner program with clear incentive slabs, a deal registration process, and an SPC mechanism. n 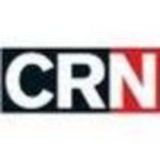