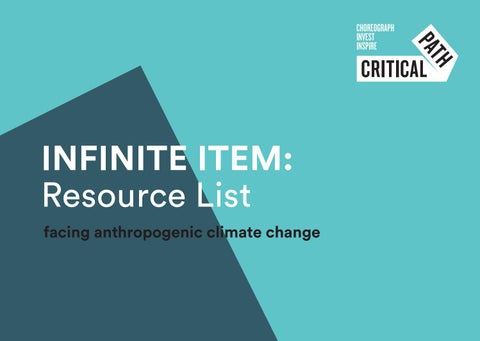 Infinite Items and ongoing research and communication On 3 and 4 July 2020 Dean Walsh along with a team of associate collaborators from newly formed company, Weird Nest, presented a two-night stage(d) development of a 75 minute work ‘Infinite Item’. These two “dressed up” showings were originally to be included as a more informal, segmented, performance as part of a three-day project called ‘Unprecedented’. Dean’s interest was in co-leading with Andrew Batt-Rawden (cofounder of Weird Nest) and social ecologist friend Julie Regalado, the facilitation of a small group of artists, academics and environmental experts. These are people with whom he has had direct connections and/or discussions with across several years, in a series of public talks, pop-up responses and collaborations exploring new and diverse methods of communicating ‘more-than-human’ interest stories.

The idea was to develop a “wider lens” and multi-perspective approach, embracing and identifying the trans-contextual nature of engaging and developing community in a more ‘easy-to-comprehend’ means of scoping and reflecting some of the key overwhelming issues we all face due to anthropogenic climate change - from creative, embodied, as well as evidence-based interdependent disciplines. With the arrival of COVID-19 and the global lockdown, that idea had to be reconsidered. Ironically, Infinite Item, as a more fully realised and pandemic-adapted and live broadcast project, was the default outcome of an unprecedented global event. As such, the work, ultimately, probably serves as an even more apt community-engaging “event” that promotes deeper reflection on where we have arrived at as a species that now manipulates our planet’s biosphere – especially the hydrosphere.

Since 2007, Dean has embarked upon extensive hands-on, theoretical and collaborative research, in several keys areas of interest within inter-environmental (primarily marine), community awarenessbuilding capacities. These include: • Pollution problems • Marine species physiology, movement and behavioural research – from scientific and zoomorphic and therianthropic perspectives • Extended Cognition studies • Habitat depletion • Over-fishing crisis • Blue carbon research • Play with the physics and techniques associated with both SCUBA and free diving • The formation of a movement referencing taxonomy (codified and transcontextual system) • Organising embodied marine-influenced practices that are accessible to and inclusive of, all minds and bodies

Dean has an extensive reading and research list that he’d like to share with anyone interested in exploring and knowing more about these areas of climate change and marine environmental concern themselves. You can find the more extensive list very soon on Weird Nest’s website under ‘research’. Dean has elected to include images of the reading list as visual reference for those of us more visually receptive to information. Please note that some of these titles are in excess of $150 to buy in hard copy but can be purchased online as PDFs for a fraction of the price. September 2020

The Sea Around Us Rachel Carson

The Soul of an Octopus Sy Montgomery

Ten Years of Exploration Infinite Item has a decade-long development history. The issues of plastic and noise pollution have long been in Dean’s choreographic orbit. Dean first commenced the formation of a marine environmentallyattuned movement research methodology and overall practice redevelopment during a two-week Critical Path residency in 2007 with then collaborator, Jeff Stein. Then, based on the success of that residency he again coordinated a three-week residency with seven dancers in 2009. After this he was “pumped and primed” to continue investigating this area of research and felt he needed to go deep – “fathoming the depths of what this scuba and dance and marine environmentalism could be”. He was successful in being awarded the Australia Council twoyear Dance Fellowship (2011-2012), within which he did deepen his researched significantly. With Narelle Benjamin and Paul Selwyn Norton as occasional consultants, hundreds of hours in deep research

with 26 dancers (across the two years), and close to one thousand hours working between in-situ (marine) and in-studio solo and scientist collaborations and play, he found a far more rich and robust creative research practice developing that also drew from his previous 20 year practice at the time. Alongside and within this research he made three works, FATHOM presented for Performance Space’s Uneasy Futures season 2011, iSellfish a 20-minute performance for Critical Path’s SEAM Symposium launch 2011, and Under Pressure for FORMS Dance Project’s Dance Bites October season 2012. These projects deepened and sustained his fellowship research contemporaneously and beyond it, into 2013 and 2014. In turn, this all helped him form his accessible and inclusive “embodied marine environmental” practice and research movement taxonomy, now known as PrimeOrderly. Between 2013 and 2015 Dean was invited to present his research as ‘lecture demos’ (lecdems), at environmental conferences and symposiums. He led ‘subMARINE’, a three-week community-engaging collaboration with 2013 National Science Week, Tasdance, eight

public schools, the Institute of Marine and Antarctic Studies (IMAS) and the Woodbridge Marine Discovery Centre. This culminated in a three-night presentation held in Hobart. Also in 2013 he was invited to attend the two-day the International Union for the Conservation of Nature (IUCN) Marine Symposium â&amp;#x20AC;&amp;#x201C; TRUE BLUE: PROGRESS, CHALLENGES AND OPPORTUNITIES FOR AUSTRALIAâ&amp;#x20AC;&amp;#x2122;S MARINE ENVIRONMENT. Apart from around 100 marine experts and politicians, the symposium had several artists from other artforms and about twenty First Nations people in attendance. Huge on the agenda was the catastrophic effects of over-fishing and plastic and noise pollution. In 2014 he was invited by the Australian Committee for the IUCN ecologist, Dr Judith Fisher, to collaborate and present his research and a talk for the World Parks Congress, held in Sydney for the first time in its 60-year history. Over 2,000 environmental delegates from just about every country and nation across the globe were present. This week-long event was huge and extraordinary.

On a more personal and smaller community scale, Dean has engaged in and instigated many plastic clean-ups (above and below water surface) and some animal rescue through his diving practice since 2008. He started keeping a tally of these. His calculations in 2017 were that, he alone, has removed in excess of 16.5 tonnes of plastic debris since November 2010! As he progressed through his Dance Fellowship, he felt compelled to make a work about plastic debris. For his fellowship closing performance in 2012, Under Pressure, he created a coral reef out of found plastic wine bladders that were destroyed in the process of the work by the three performers,3 Dean, Kathryn Puie and Natalie Ayton, and then repurposed as several other â&amp;#x20AC;&amp;#x153;life-savingâ&amp;#x20AC;? devices. In 2014 Dean was invited again by Performance Space to participate in the inaugural Day 4 Night event in Bay 17, Carriageworks. This was a three-day durational installation performance with several other queer artists, as part of the Mardi Gras Cultural Festival. He constructed an evolving work (that the audience also participated in), called PlastiCities, that built a huge structure out of found plastic debris, interspersed with moments of dance performance. During his

three-day “performance as process” he decided he wanted to make a full-length work that would also include another major subaquatic and oceanic pollution concern – that of noise. In 2018 Dean was invited by PACT Centre for Emerging Artists for the inaugural AFTER GLOW: GENERATIONS 2018 series and a double bill with choreographer and performer Cloé Fournier. That work, Threshold: NRC, was the first version of Infinite Item. When Dean was invited by Critical Path supported by Woollahra Municipal Council to engage in a residency as part of their combined commitment to the now international Plastic Free July Campaign, he immediately thought of presenting aspects of Threshold: NRC for what was to be his planned three-day cross-collaborative event, Unprecedented.

Supported by Woollahra Council through a Cultural and Community Grant

Critical Path respectfully acknowledges the Gadigal; the traditional custodians of the land on which the organisation is based.

Infinite Item is Dean Walsh's decade-long exploration-in-progress. Dean has an extensive reading and research list that he’d like to share with anyone interested in exploring and knowing more about these areas of climate change and marine environmental concern themselves. Infinite Item is supported by Woollahra Municipal Council through the Community and Cultural Grants Program.