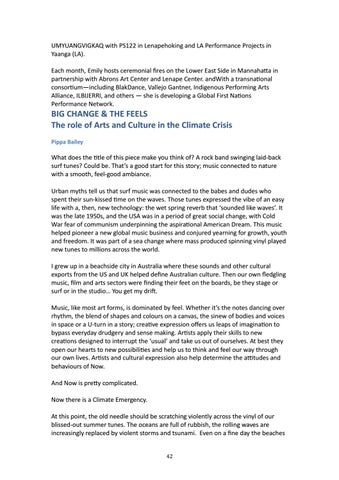 UMYUANGVIGKAQ with PS122 in Lenapehoking and LA Performance Projects in Yaanga (LA). Each month, Emily hosts ceremonial fires on the Lower East Side in Mannahatta in partnership with Abrons Art Center and Lenape Center. andWith a transnational consortium—including BlakDance, Vallejo Gantner, Indigenous Performing Arts Alliance, ILBIJERRI, and others — she is developing a Global First Nations Performance Network.

BIG CHANGE &amp; THE FEELS The role of Arts and Culture in the Climate Crisis Pippa Bailey

What does the title of this piece make you think of? A rock band swinging laid-back surf tunes? Could be. That’s a good start for this story; music connected to nature with a smooth, feel-good ambiance. Urban myths tell us that surf music was connected to the babes and dudes who spent their sun-kissed time on the waves. Those tunes expressed the vibe of an easy life with a, then, new technology: the wet spring reverb that ‘sounded like waves’. It was the late 1950s, and the USA was in a period of great social change, with Cold War fear of communism underpinning the aspirational American Dream. This music helped pioneer a new global music business and conjured yearning for growth, youth and freedom. It was part of a sea change where mass produced spinning vinyl played new tunes to millions across the world. I grew up in a beachside city in Australia where these sounds and other cultural exports from the US and UK helped define Australian culture. Then our own fledgling music, film and arts sectors were finding their feet on the boards, be they stage or surf or in the studio… You get my drift. Music, like most art forms, is dominated by feel. Whether it’s the notes dancing over rhythm, the blend of shapes and colours on a canvas, the sinew of bodies and voices in space or a U-turn in a story; creative expression offers us leaps of imagination to bypass everyday drudgery and sense making. Artists apply their skills to new creations designed to interrupt the ‘usual’ and take us out of ourselves. At best they open our hearts to new possibilities and help us to think and feel our way through our own lives. Artists and cultural expression also help determine the attitudes and behaviours of Now. And Now is pretty complicated. Now there is a Climate Emergency. At this point, the old needle should be scratching violently across the vinyl of our blissed-out summer tunes. The oceans are full of rubbish, the rolling waves are increasingly replaced by violent storms and tsunami. Even on a fine day the beaches 42

Artists from four continents, an educator and a producer, share their thoughts and work. We asked them to write a ‘feeling response’ to the Anthropocene. Edited by Tamar Kelly with contributions from Renae Shadler, Eko Supriyanto, Sam Hertz, Emily Johnson, Kenneth McLeod and Pippa Bailey.