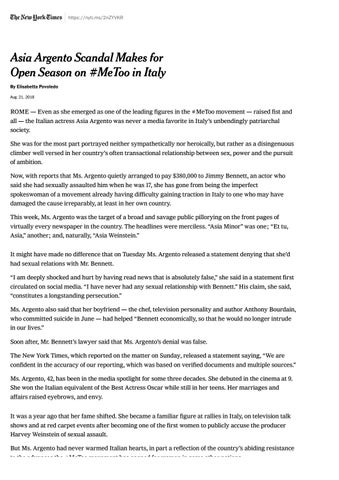 ROME — Even as she emerged as one of the leading figures in the #MeToo movement — raised fist and all — the Italian actress Asia Argento was never a media favorite in Italy’s unbendingly patriarchal society. She was for the most part portrayed neither sympathetically nor heroically, but rather as a disingenuous climber well versed in her country’s often transactional relationship between sex, power and the pursuit of ambition. Now, with reports that Ms. Argento quietly arranged to pay $380,000 to Jimmy Bennett, an actor who said she had sexually assaulted him when he was 17, she has gone from being the imperfect spokeswoman of a movement already having difficulty gaining traction in Italy to one who may have damaged the cause irreparably, at least in her own country. This week, Ms. Argento was the target of a broad and savage public pillorying on the front pages of virtually every newspaper in the country. The headlines were merciless. “Asia Minor” was one; “Et tu, Asia,” another; and, naturally, “Asia Weinstein.” It might have made no difference that on Tuesday Ms. Argento released a statement denying that she’d had sexual relations with Mr. Bennett. “I am deeply shocked and hurt by having read news that is absolutely false,” she said in a statement first circulated on social media. “I have never had any sexual relationship with Bennett.” His claim, she said, “constitutes a longstanding persecution.” Ms. Argento also said that her boyfriend — the chef, television personality and author Anthony Bourdain, who committed suicide in June — had helped “Bennett economically, so that he would no longer intrude in our lives.” Soon after, Mr. Bennett’s lawyer said that Ms. Argento’s denial was false. The New York Times, which reported on the matter on Sunday, released a statement saying, “We are confident in the accuracy of our reporting, which was based on verified documents and multiple sources.” Ms. Argento, 42, has been in the media spotlight for some three decades. She debuted in the cinema at 9. She won the Italian equivalent of the Best Actress Oscar while still in her teens. Her marriages and affairs raised eyebrows, and envy. It was a year ago that her fame shifted. She became a familiar figure at rallies in Italy, on television talk shows and at red carpet events after becoming one of the first women to publicly accuse the producer Harvey Weinstein of sexual assault. But Ms. Argento had never warmed Italian hearts, in part a reflection of the country’s abiding resistance to the advances the #MeToo movement has opened for women in some other nations.

to the advances the #MeToo movement has opened for women in some other nations. The stridently conservative and deliberately provocative Italian newspaper Libero, for instance, had followed her accusations against Mr. Weinstein with an article that suggested, “First they give it away, then they whine and pretend to regret it.” Similarly, after Mr. Bourdain’s suicide, Ms. Argento was again unfavorably profiled in Italian news media because of a series of photographs that showed her dancing with a French friend a few days before Mr. Bourdain’s death.

The latest takedown, then, came as no surprise. Ms. Argento is fundamentally “antipatica” to Italians, Flavia Perina wrote in Il Giornale on Tuesday. Right or wrong, Ms. Argento has been tagged with a “live fast” mentality, and the eccentricities that peg her male counterparts as charismatic or unconventional are regularly used against her as “nails with which to crucify a disorderly career,” Ms. Perina wrote. In a front-page editorial in the Turin daily La Stampa, Mattia Feltri wrote, “She immediately ended up like Robespierre: guillotined because she ordered some guillotined.” The daughter of a master of horror films, Dario Argento, Ms. Argento made her debut in a 1985 film alongside Giulietta Masina. She won Italy’s top honor for best actress twice in four years before she was 22. She wrote poetry, she recorded records, she turned to directing.

But in general, Italians were more interested in her bohemian lifestyle. Her tattoos. Her lovers, from the Italian musician known as Morgan to Mr. Bourdain, and many in between. Her directorial debut, the semi-autobiographical “Scarlet Diva,” which she also wrote and starred in, is described thus in the movie database IMDB: “A young Italian actress embarks on a self-destructive spree of sex, drugs and other excess while doing some soul-searching to find the path for redemption.” It sealed her reputation as not the girl next door. In chronicling Ms. Argento’s troubles on Tuesday, Italian newspapers came up with supposed outrages from the past. There was the time in 2009 when she and hundreds of others signed a petition supporting Roman Polanski, who had been arrested in Switzerland on an outstanding warrant for an underage sex

Roman Polanski, who had been arrested in Switzerland on an outstanding warrant for an underage sex case. And there was the 2007 film by Abel Ferrara in which she kissed a Rottweiler. Then there was the overt smugness of some commentators, as if Ms. Argento’s presumed fall from grace nullified the entirety of the #MeToo movement. “Who will recompense the ruined men?” asked Antonello Piroso, writing in the daily La Verita. Mr. Piroso’s article also kept tabs on the fallout of Italy’s #MeToo movement. “Two to zero.” Two to zero. Because nearly a year after the birth of the global movement to hold men to account for their abuse of power over women, only one Italian man of note, a movie director, was publicly accused of making unwanted sexual advances. But last month, a Rome prosecutor asked for the case to be dismissed. The critics of #MeToo rejoiced. The two in the equation would be Ms. Argento. The collapse of the case against the Italian film director and the accusations against Ms. Argento don’t help the cause of women fighting sexual harassment in Italy, said Cristina Sivieri Tagliabue, the president of Non Chiederci la Parola, an association that monitors women and the media. “The #MeToo Movement never happened here, and now this will be used as an excuse to blame all women,” Ms. Tagliabue said. Even some who once vocally defended Ms. Argento had little to say on Tuesday. Laura Boldrini, the former president of Italy’s lower house of Parliament who used her to position to shine a spotlight on a pervasive culture of sexual harassment, declined to be interviewed for this article. A spokesman said she didn’t want to intervene. “There’s a desire in today’s Italy for public lynching, not just Asia, but any scapegoats,” said Francesca Koch, the president of the International Women’s House in Rome. She was referring to the mudslinging and accusations that have followed the collapse of a bridge in Genoa last week that left at least 43 dead. The way Ms. Argento has been humiliated in the press recalled the attacks of defense lawyers in rape trials “slurring the reputation of the victims,” she said. “I think this phenomenon gives a measure of the reaction of the male establishment which found a road for a ferocious vendetta” against the #MeToo movement in Italy, she said. Correction: Aug. 21, 2018

An earlier version of a picture caption with this article misstated the month that Asia Argento and Rose McGowan attended a march this year in Rome. It was March, not April. Kim Severson contributed reporting from Atlanta. A version of this article appears in print on Aug. 22, 2018, Section A, Page 5 of the New York edition with the headline: Italy, Already Wary of Unorthodox Star And #MeToo, Pounces on Actor’s Claim 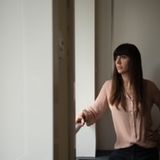