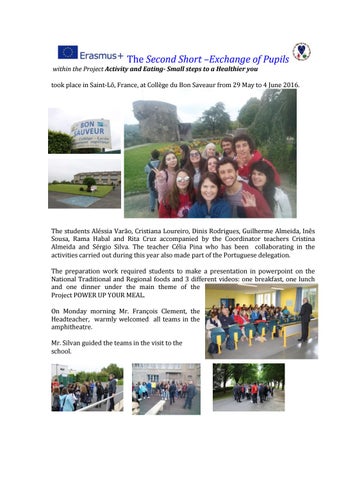 The Second Short –Exchange of Pupils

within the Project Activity and Eating- Small steps to a Healthier you took place in Saint-Lô, France, at Collège du Bon Saveaur from 29 May to 4 June 2016.

The students Aléssia Varão, Cristiana Loureiro, Dinis Rodrigues, Guilherme Almeida, Inês Sousa, Rama Habal and Rita Cruz accompanied by the Coordinator teachers Cristina Almeida and Sérgio Silva. The teacher Célia Pina who has been collaborating in the activities carried out during this year also made part of the Portuguese delegation. The preparation work required students to make a presentation in powerpoint on the National Traditional and Regional foods and 3 different videos: one breakfast, one lunch and one dinner under the main theme of the Project POWER UP YOUR MEAL. On Monday morning Mr. François Clement, the Headteacher, warmly welcomed all teams in the amphitheatre. Mr. Silvan guided the teams in the visit to the school.

Portugal In the afternoon some physical activity followed with the Badmington Tournament in international teams.

Saint-Lô is the city where these european teams met. It is a commune in north-western France, the Prefecture of La Manche and an important crossroads, was 95% destroyed by allied bombs on 6th and 7th June 1944. Saint –Lô is known as the “Capital of Ruins”. Saint-Lô, the Horse Capital, is situated in the heart of the Cherbourg peninsula. The Manche department's capital is surrounded by ramparts and overlooked by the Notre Dame "cathedral". It is a city where the past, present and future meet.

Tuesday Trip to Mont Saint Michel- a World Heritage site. A guided crossing of Mont S. Michel Bay- tour the Abbey, pass through the local businesses along Grand Rue and wander along the medieval Wall.

Wednesday Power up Your Meal – Presentation of the National Eating vídeos created at home.

The best part of the day was yet to come. Teen Masterchef workshop

All teams positively imprinted attitude, taste, flavour and a precious ingredient to link the cooking, Happiness. ..

Bowling was another wonderful idea to foster friendship among all the students and teachers.

Thursday Trip to American Cemetery and Memorial of Colville-Omaha Beach.

The government of France granted use of this land as a permanente burial ground without charge.

The Memorial is 22-foot statue â&#x20AC;&#x153;The spirit of American youth rising from the wavesâ&#x20AC;? facing West toward the headstones. Maps on the walls and a short description of allied landings on June 6, 1944. We walked the Garden of the Missing which leads to a Memorial overlooking a reflecting pool, then the grave plots and the chapel.

The American Cemetery was inaugurated in 1956. There are the graves of 9,387 soldiers who fell in combat; 172,5 acres are covered by aligned headstones of white lasa marble latin crosses and stars of David in an environment of trees, shrubs and roses highlight the grave plots and a variety of trees grace the lawn areas. It honours American soldiers who died during the battle of Normandy and is one of the permanent cemeteries outside the U.S. to commemorate the war dead of WWI and WWII who rest in foreign soil.

The visitor centre depicts the significance and meaning of operation Overlord and honors the values and sacrifices of the World War II generation situated just above Omaha beach at Colleville-sur-Mer.

About 45 minutes of bus trip is Caen. It was nicknamed the â&#x20AC;&#x153;Town of 100 Bell Towersâ&#x20AC;? due to the number of bell towers and religious congregations. Le Chateau de Caen

Friday After working together in the common Europeam meal, followed the presentations with lots of creativity and great work.

Football Tornament in the afternoon. Who won?

Cocktail Reception by the City Mayor

A week plenty of interesting and engaging activities everyone will keep in memory for life. Thanks Mariana Navrotescu and the French Team & School teachers for hosting us so lovely. Thanks to every student who worked, cooperated, created bonds making a real european team to successfully achieve one more step of this project. These experiences help building deep relationships which will last in time and go on beyond the learning within walls and in books, in particular the respect for the others. Futhermore the differences make us unique, richer and stronger. Obrigada. Saudades. The Coordinator, Cristina Almeida 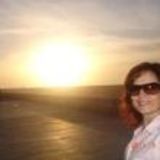