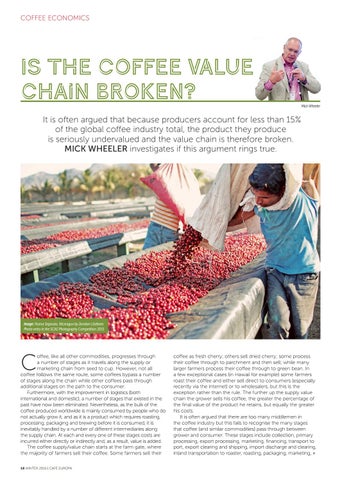 Is the Coffee Value Chain Broken?

It is often argued that because producers account for less than 15% of the global coffee industry total, the product they produce is seriously undervalued and the value chain is therefore broken. MICK WHEELER investigates if this argument rings true.

offee, like all other commodities, progresses through a number of stages as it travels along the supply or marketing chain from seed to cup. However, not all coffee follows the same route, some coffees bypass a number of stages along the chain while other coffees pass through additional stages on the path to the consumer. Furthermore, with the improvement in logistics (both international and domestic), a number of stages that existed in the past have now been eliminated. Nevertheless, as the bulk of the coffee produced worldwide is mainly consumed by people who do not actually grow it, and as it is a product which requires roasting, processing, packaging and brewing before it is consumed, it is inevitably handled by a number of different intermediaries along the supply chain. At each and every one of these stages costs are incurred either directly or indirectly and, as a result, value is added. The coffee supply/value chain starts at the farm gate, where the majority of farmers sell their coffee. Some farmers sell their 16 WINTER 2016 | CAFÉ EUROPA

coffee as fresh cherry; others sell dried cherry; some process their coffee through to parchment and then sell; while many larger farmers process their coffee through to green bean. In a few exceptional cases (in Hawaii for example) some farmers roast their coffee and either sell direct to consumers (especially recently via the internet) or to wholesalers, but this is the exception rather than the rule. The further up the supply value chain the grower sells his coffee, the greater the percentage of the final value of the product he retains, but equally the greater his costs. It is often argued that there are too many middlemen in the coffee industry but this fails to recognise the many stages that coffee (and similar commodities) pass through between grower and consumer. These stages include collection, primary processing, export processing, marketing, financing, transport to port, export clearing and shipping, import discharge and clearing, inland transportation to roaster, roasting, packaging, marketing, » 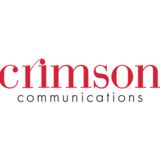 The magazine of the Speciality Coffee Association of Europe, produced for SCAE by Crimson Media + Communications.

The magazine of the Speciality Coffee Association of Europe, produced for SCAE by Crimson Media + Communications.