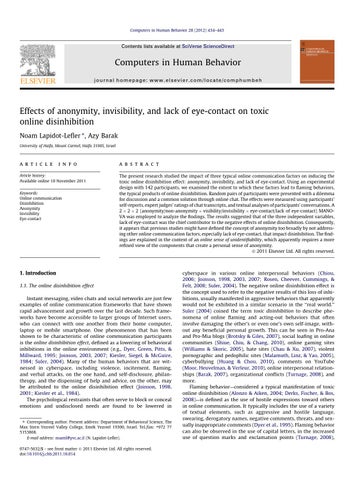 a b s t r a c t The present research studied the impact of three typical online communication factors on inducing the toxic online disinhibition effect: anonymity, invisibility, and lack of eye-contact. Using an experimental design with 142 participants, we examined the extent to which these factors lead to ﬂaming behaviors, the typical products of online disinhibition. Random pairs of participants were presented with a dilemma for discussion and a common solution through online chat. The effects were measured using participants’ self-reports, expert judges’ ratings of chat transcripts, and textual analyses of participants’ conversations. A 2  2  2 (anonymity/non-anonymity  visibility/invisibility  eye-contact/lack of eye-contact) MANOVA was employed to analyze the ﬁndings. The results suggested that of the three independent variables, lack of eye-contact was the chief contributor to the negative effects of online disinhibition. Consequently, it appears that previous studies might have deﬁned the concept of anonymity too broadly by not addressing other online communication factors, especially lack of eye-contact, that impact disinhibition. The ﬁndings are explained in the context of an online sense of unidentiﬁability, which apparently requires a more reﬁned view of the components that create a personal sense of anonymity. Ó 2011 Elsevier Ltd. All rights reserved.

1. Introduction 1.1. The online disinhibition effect Instant messaging, video chats and social networks are just few examples of online communication frameworks that have shown rapid advancement and growth over the last decade. Such frameworks have become accessible to larger groups of Internet users, who can connect with one another from their home computer, laptop or mobile smartphone. One phenomenon that has been shown to be characteristic of online communication participants is the online disinhibition effect, deﬁned as a lowering of behavioral inhibitions in the online environment (e.g., Dyer, Green, Pitts, & Millward, 1995; Joinson, 2003, 2007; Kiesler, Siegel, & McGuire, 1984; Suler, 2004). Many of the human behaviors that are witnessed in cyberspace, including violence, incitement, ﬂaming, and verbal attacks, on the one hand, and self-disclosure, philanthropy, and the dispensing of help and advice, on the other, may be attributed to the online disinhibition effect (Joinson, 1998, 2001; Kiesler et al., 1984). The psychological restraints that often serve to block or conceal emotions and undisclosed needs are found to be lowered in ⇑ Corresponding author. Present address: Department of Behavioral Science, The Max Stern Yezreel Valley College, Emek Yezreel 19300, Israel. Tel./fax: +972 77 5153868. E-mail address: noaml@yvc.ac.il (N. Lapidot-Leﬂer). 0747-5632/$ - see front matter Ó 2011 Elsevier Ltd. All rights reserved. doi:10.1016/j.chb.2011.10.014

cyberspace in various online interpersonal behaviors (Chiou, 2006; Joinson, 1998, 2003, 2007; Rosen, Cheever, Cummings, & Felt, 2008; Suler, 2004). The negative online disinhibition effect is the concept used to refer to the negative results of this loss of inhibitions, usually manifested in aggressive behaviors that apparently would not be exhibited in a similar scenario in the ‘‘real world.’’ Suler (2004) coined the term toxic disinhibition to describe phenomena of online ﬂaming and acting-out behaviors that often involve damaging the other’s or even one’s own self-image, without any beneﬁcial personal growth. This can be seen in Pro-Ana and Pro-Mia blogs (Brotsky & Giles, 2007), social loaﬁng in online communities (Shiue, Chiu, & Chang, 2010), online gaming sites (Williams & Skoric, 2005), hate sites (Chau & Xu, 2007), violent pornographic and pedophilic sites (Malamuth, Linz, & Yao, 2005), cyberbullying (Huang & Chou, 2010), comments on YouTube (Moor, Heuvelman, & Verleur, 2010), online interpersonal relationships (Barak, 2007), organizational conﬂicts (Turnage, 2008), and more. Flaming behavior—considered a typical manifestation of toxic online disinhibition (Alonzo & Aiken, 2004; Derks, Fischer, & Bos, 2008)—is deﬁned as the use of hostile expressions toward others in online communication. It typically includes the use of a variety of textual elements, such as aggressive and hostile language, swearing, derogatory names, negative comments, threats, and sexually inappropriate comments (Dyer et al., 1995). Flaming behavior can also be observed in the use of capital letters, in the increased use of question marks and exclamation points (Turnage, 2008),