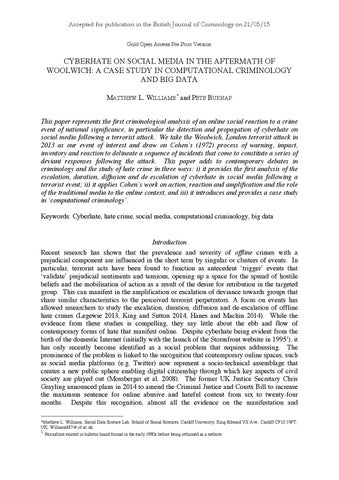 CYBERHATE ON SOCIAL MEDIA IN THE AFTERMATH OF WOOLWICH: A CASE STUDY IN COMPUTATIONAL CRIMINOLOGY AND BIG DATA MATTHEW L. WILLIAMS * and PETE BURNAP 1

This paper represents the first criminological analysis of an online social reaction to a crime event of national significance, in particular the detection and propagation of cyberhate on social media following a terrorist attack. We take the Woolwich, London terrorist attack in 2013 as our event of interest and draw on Cohen’s (1972) process of warning, impact, inventory and reaction to delineate a sequence of incidents that come to constitute a series of deviant responses following the attack. This paper adds to contemporary debates in criminology and the study of hate crime in three ways: i) it provides the first analysis of the escalation, duration, diffusion and de-escalation of cyberhate in social media following a terrorist event; ii) it applies Cohen’s work on action, reaction and amplification and the role of the traditional media to the online context, and iii) it introduces and provides a case study in ‘computational criminology’. Keywords: Cyberhate, hate crime, social media, computational criminology, big data

Introduction Recent research has shown that the prevalence and severity of offline crimes with a prejudicial component are influenced in the short term by singular or clusters of events. In particular, terrorist acts have been found to function as antecedent ‘trigger’ events that ‘validate’ prejudicial sentiments and tensions, opening up a space for the spread of hostile beliefs and the mobilisation of action as a result of the desire for retribution in the targeted group. This can manifest in the amplification or escalation of deviance towards groups that share similar characteristics to the perceived terrorist perpetrators. A focus on events has allowed researchers to study the escalation, duration, diffusion and de-escalation of offline hate crimes (Legewie 2013, King and Sutton 2014, Hanes and Machin 2014). While the evidence from these studies is compelling, they say little about the ebb and flow of contemporary forms of hate that manifest online. Despite cyberhate being evident from the birth of the domestic Internet (initially with the launch of the Stormfront website in 19951), it has only recently become identified as a social problem that requires addressing. The prominence of the problem is linked to the recognition that contemporary online spaces, such as social media platforms (e.g. Twitter) now represent a socio-technical assemblage that creates a new public sphere enabling digital citizenship through which key aspects of civil society are played out (Mossberger et al. 2008). The former UK Justice Secretary Chris Grayling announced plans in 2014 to amend the Criminal Justice and Courts Bill to increase the maximum sentence for online abusive and hateful content from six to twenty-four months. Despite this recognition, almost all the evidence on the manifestation and *Matthew L. Williams, Social Data Science Lab, School of Social Sciences, Cardiff University, King Edward VII Ave., Cardiff CF10 3WT, UK; WilliamsM7@ cf.ac.uk. 1

Stormfront existed in bulletin board format in the early 1990s before being reformed as a website.