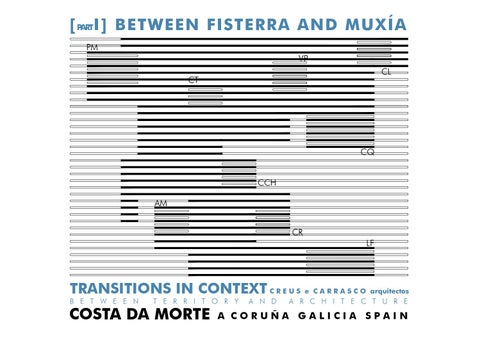 Part of the Galician coast, located in the north-west of the Iberian Peninsula. Territory characterized by having a strong landscape and historical identity.

TRANSITIONS IN CONTEXT. Between Territory and Architecture. 1 Architecture builds a space that is going to be used. This apparently simple question, related with the rational and the necessary, is proved just when it is lived and trough experience. Inhabitance relates the existence with the conditions of the space. 2 That is why, even if the determinants of the architecture respond to a known behaviour, almost globalized, its form is conceived with the actions occurring and not just with the theory or the already known. The process of discovering architecture is a step by step experience. 3 From the house, which summarize the passion for life and an intimate place; to the territory, as an expression of the collective experience of the landscape. 4 Between them: equipments and plazas. Entities involving the convergence of a group. Also, the paths, acting as a sequence that discovers transitions and links among territory and architecture. 5 Our approach for the exhibition â&#x20AC;&#x153;Time Space Existenceâ&#x20AC;? delves into the influence that a territory has over the built pieces, improving the existence, as architecture contributes with something else. 6 We claim the importance of taking into account the values of the landscape. The architectural work is taken as part of it whose experience will not leave you indifferent since it is a new interpretation of the context.

7 Our architectural work is located in Costa da Morte, a mythical landscape of “rías” and shipwrecks, located between the rain and the fog, sometimes even invented to subsist. A landscape where some shapes and materials have been ennobled as key points of a culture. 8 That’s why it is important to understand the sense of treating an element of the natural world as an object and likewise understand an architectural work as the synthesis of an entire landscape. 9 The model we propose for this exhibition represents the territory- a combination of abstract and reality-, in which our works and projects are placed. Those are represented by pieces rising from the interpretation of all the elements which characterize them. 10 On one side, in a first level, the landscape’s references meaning the intangible material, lines defining ambient qualities and linking the architectural work. 11 On the other side, our works, as materializations of the intangible through the construction, summarize different ways of inhabiting a place. The overlap between the references of the project and a superposition of layers with information of our work, allows for going through it and discovering the transitions between territory and architecture. Transitions in context. 12 The architecture, as a way of art that produces the translation between the landscape and the object, is a reinterpretation of the existence that also means a change, an interference in time.

This project is a pioneering experience in Galicia, gives the possibility of receiving visitors at the same time that the market activity is made. Basically we propose two very simple operation schemes considering that theyâ&#x20AC;&#x2122;re not touched: the first one, the visitors route, disposed as a longitudinal itinerary elevated around of the auction space (ring), which begins and ends at the lobby; the second one, the market route, defined by the linear sequence at the works ground level, with crossed accesses to load and offloading the merchandise (spine). From each volume a vertical communication is born; ramps and stairs connect the entrance floor with the two footbridges that cross the exhibition hall and the auction space. Their lateral panels are protected with inclined glass plans that work as hygienic barriers and serve as support to the exposition material. The presence of the building in the wharf is narrowed until disappearing when begins the deposit of boats and moors ramp.

MuxĂ­a is one of the emblematic reference points on Camino de Santiago in its continuity and connection with the coast of Galicia. The expansion is done on a recent building and proposes a new way to configure the space by rooms surrounded by terraces, courtyards and balconies, which act as common areas that reinforce the hostel. A landscape made up of corners and accessibility that incorporates perspectives and images of what surrounds it. The proposal relates languages of the architectural tradition of the place with the industry and popular culture with walking as an aesthetic experience. The dimensions of the materials and construction processes used both in the facade and roof, are also geometric patterns that allow giving depth to the volumes (open paths) and solve the functionality of the new spaces. The corners are a bend on the walkersâ&#x20AC;&#x2122; path that allow non linear reading of the space. It is the sign of another landscape. An inherent shape related to tradition as part of its own dynamic of change. A manifested value of a new permanence.

BETWEEN TERRITORY AND ARCHITECTURE 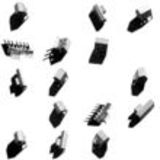 TRANSITIONS IN CONTEXT. part I- Between Fisterra and Muxía.

Between territory and architecture. COSTA DA MORTE. Extract from the book that come with the model exhibited in Palazzo Mora, for the Venize...

TRANSITIONS IN CONTEXT. part I- Between Fisterra and Muxía.

Between territory and architecture. COSTA DA MORTE. Extract from the book that come with the model exhibited in Palazzo Mora, for the Venize...