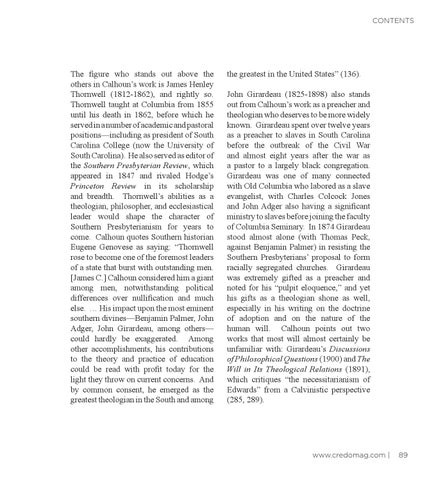 The figure who stands out above the others in Calhoun’s work is James Henley Thornwell (1812-1862), and rightly so. Thornwell taught at Columbia from 1855 until his death in 1862, before which he served in a number of academic and pastoral positions—including as president of South Carolina College (now the University of South Carolina). He also served as editor of the Southern Presbyterian Review, which appeared in 1847 and rivaled Hodge’s Princeton Review in its scholarship and breadth. Thornwell’s abilities as a theologian, philosopher, and ecclesiastical leader would shape the character of Southern Presbyterianism for years to come. Calhoun quotes Southern historian Eugene Genovese as saying: “Thornwell rose to become one of the foremost leaders of a state that burst with outstanding men. [James C.] Calhoun considered him a giant among men, notwithstanding political differences over nullification and much else. … His impact upon the most eminent southern divines—Benjamin Palmer, John Adger, John Girardeau, among others— could hardly be exaggerated. Among other accomplishments, his contributions to the theory and practice of education could be read with profit today for the light they throw on current concerns. And by common consent, he emerged as the greatest theologian in the South and among

the greatest in the United States” (136). John Girardeau (1825-1898) also stands out from Calhoun’s work as a preacher and theologian who deserves to be more widely known. Girardeau spent over twelve years as a preacher to slaves in South Carolina before the outbreak of the Civil War and almost eight years after the war as a pastor to a largely black congregation. Girardeau was one of many connected with Old Columbia who labored as a slave evangelist, with Charles Colcock Jones and John Adger also having a significant ministry to slaves before joining the faculty of Columbia Seminary. In 1874 Girardeau stood almost alone (with Thomas Peck, against Benjamin Palmer) in resisting the Southern Presbyterians’ proposal to form racially segregated churches. Girardeau was extremely gifted as a preacher and noted for his “pulpit eloquence,” and yet his gifts as a theologian shone as well, especially in his writing on the doctrine of adoption and on the nature of the human will. Calhoun points out two works that most will almost certainly be unfamiliar with: Girardeau’s Discussions of Philosophical Questions (1900) and The Will in Its Theological Relations (1891), which critiques “the necessitarianism of Edwards” from a Calvinistic perspective (285, 289). 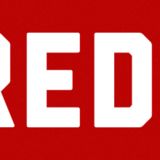 Why Biblical Theology Should Matter to Every Bible-Reading Christian

Why Biblical Theology Should Matter to Every Bible-Reading Christian