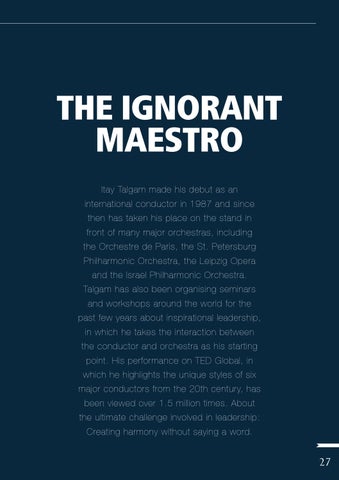 The ignorant maestro Itay Talgam made his debut as an international conductor in 1987 and since then has taken his place on the stand in front of many major orchestras, including the Orchestre de Paris, the St. Petersburg Philharmonic Orchestra, the Leipzig Opera and the Israel Philharmonic Orchestra. Talgam has also been organising seminars and workshops around the world for the past few years about inspirational leadership, in which he takes the interaction between the conductor and orchestra as his starting point. His performance on TED Global, in which he highlights the unique styles of six major conductors from the 20th century, has been viewed over 1.5 million times. About the ultimate challenge involved in leadership: Creating harmony without saying a word.

How did you come up with the idea of developing a programme that focused on leadership and behaviour in teams and organisations alongside your musical activities? "As is true for many things in life it was purely coincidental. A friend of a friend, who was HR manager for a major bank at the time, asked me to give a reading to the senior management. She warned me that the audience was not totally comfortable with classical music so I had to think of something to make it interesting for them. That's how it started, though I must add that I didn't have to think of everything myself: Conducting an orchestra has already been used by many people as a metaphor for leadership. The challenge was mainly to create something that went further than the metaphor alone."

Obviously you did it: You are now in great demand as a speaker and consultant. What motivates an internationally acclaimed conductor who can command the fees that go with this status to stand in front of a room full of managers? "I assure you, it is easier to earn a living in the management world than in the realm of the fine arts. Though yes: I believe that I have a number of useful, valuable insights to offer and if people want to pay for that then so much the better. Incidentally I emphasise to my students, future conductors and young artists to always look for connections with other fields, other lifestyles and other professions. This type of exchange is very enriching for both them and myself."

On your website you wrote that making music can be considered a metaphor for all forms of human creativity â&#x20AC;&#x2DC;from the classroom to the boardroomâ&#x20AC;&#x2122;. Is what happens in

a boardroom actually a creative activity or something that belongs to the creative territory?

that they don't already know. What I try and do is to subconsciously draw potential to the surface – not by telling people, but by letting look at something from a different perspective. Many leaders have

developed a certain leadership style with which they are successful:

activity. You can perform the greatest masterpieces but if you do so

They tell people what they must do and they do it in their own way.

without challenging yourself and the people working with you to

This success gets in the way, because it prevents them from discover-

open a ‘creative gap’ then it becomes routine mass production. The

ing their full potential. I try and eliminate the conceptual limita-

quality level may still be high, people still buy your product, but you are bored. Whatever you do, whether you are a lawyer or a doctor or a musician you should constantly look beyond your current horizon, so to speak - even if it's just for yourself. I think that the highly praised creativity in the arts does not basically differ from creativity in other disciplines. There are however more restrictions: matters such as company culture; certain traditions in business practices – “This is the way we’ve always done this here” – can actually represent obstacles to a creative collaboration. For these reasons classical music is an effective metaphor - precisely because classical music is not a fickle, anarchic form of creativity. It's all about satisfying certain

quality requirements and providing innovative interpretation that must also be historically accurate to a certain extent. It is creativity within certain parameters. And that is why people are open to my

tions that restrict them by leading them into the playful, fantastical,

story: They realise that however complicated or traditional their job

pleasurable world of music. I don't lecture, I don't recount anything:

may be, they can be just as creative as a classical musician."

I let them feel it. They discover things that I might not even know. It is not that I know which path they should follow. The only thing I

Part of your Maestro programme's objective is to 'help people develop the collaborative ability of a musician, and even the leadership of a conductor.' You describe this as 'an intuitive or even subconscious connection with the other players'. My experience as an amateur musician is that it is fairly simple to make this connection with someone who is also a musician. In other cases – where people play but do not connect - it can be quite frustrating. Is there something similar at play in organisations? That there are people who understand straightaway and others who seem to move in a completely different direction?

know is how they can unlock new paths to advance from where they currently find themselves."

The book you have written will soon be published:The Ignorant Maestro. Are you referring to this lack of knowledge? "The title is of course intended to be provocative but essentially that is what I want to be: an ignorant maestro. This is also what I propose the managers studying with me to become. By that I mean that the ability to unlock people's potential depends of the leader’s choice to be ignorant, not knowing exactly where his people will take their learning. Presuming to predict is actually saying: 'If you listen to me

"Ha! Musical frustration is not just experienced by non-professional

you will become just as good as me.' I am not the example and it is

musicians. Even in professional symphony orchestras there will be

better if people learn to progress in ways that I know nothing about.

players – employees – that have just had enough but, for one reason

In my opinion that is a fairly new and unusual view of leadership,

or another, due to retirement or a lack of alternatives, do not move

on. Such people can become a millstone around an organisation's neck, unless new ways of reconnecting their inner strengths and

interests in the task at hand is found. The major challenge from the point of leadership is not coping with a lack of knowledge but with a

"It all connects rather beautifully. I am inspired by a French philos-

lack of motivation. You see this in many different professions."

opher Jacques Rancière, and what he wrote about the work of the 19th century teacher Jean Joseph Jacotot. He was the one that said

It is not that a panacea has been developed for it in music.

'an ignorant master can teach another ignorant person something that he doesn't know himself.' Education is not about transplanting

your knowledge into someone else's brain; education is about primar-

ily helping someone else with the will to learn. That is incredibly

Culture important. If you think about why people find themselves stuck in certain situations, it involves the will to change more than a lack of knowledge. We all know how easy it is to gather information from all the online sources available today. But unfortunately it is not about knowledge."

You also say that an effective team is created by 'the art of listening' and 'the ability to spontaneously react in the moment'. Is that something that people can generally learn?

Lead like the great conductors Talgam is a regular visitor to our country. Last year he led students from the Knowmads Business School Amsterdam and senior management from ING. In

"To me it revolves around the fact that you must always try and listen in an unbiased manner. In a way in which you do not immediately mobilise all your prior knowledge to subsequently conclude:

You can’t exclusively impose your will on the musicians

November, the Israeli attended the annual Erasmus MC Strategy Days where he led a workshop for around eighty directors and department heads. According to Aniek Dane, Adviser Strategy, Policy &

I already know what he or she means. It is not easy but you can learn how to do it. Look, a conductor may have some wonderful ideas in mind: If you are not open to all the information you receive from the orchestra then the ideas are of limited value. You can, as a dictator, try

Accountability at Erasmus MC, prior to the session

to exclusively impose your will on the musicians, but in the long run

there was a certain amount of scepticism regarding the

planned 'music workshop' but afterwards the assessment was 'overwhelmingly positive'. "The way in which he presents leadership really comes

tion is your own intelligence."

Lastly: can you tell me something about the diversity of the organisational cultures that you encounter?

across, precisely because he does not lecture", Dane explains. "The audience mainly consisted of professors and medical specialists who do not easily accept something from another person. You have to challenge

as though everyone essentially wants the same: Everyone longs for recognition, everyone wants to be able to trust others and be trusted by others. The problems are also universal: Innovations are viewed as

them to enrich their own reality. That is something that

Talgam can do better than anyone."

term interests. That's why it is difficult to bring about major changes

According to Dane, several months later the insights

in company cultures in the long term. I don't have any ready-made

still pop up in discussions and the TEDTalk ‘Lead like the great conductors’ is even presented in staff meetings. Dane: "In a nutshell, his workshop made a serious impression."

"I travel the whole world and I see numerous organisations. Yet it is

solution for that either. Though I do believe that you cannot force something top-down: The challenge is to allow 'cells of creativity' to develop lower down the organisation that change the company culture. This is what I try to contribute to." 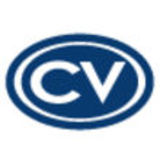