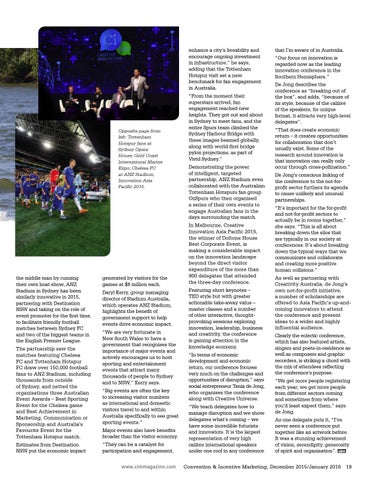 enhance a city’s liveability and encourage ongoing investment in infrastructure,” he says, adding that the Tottenham Hotspur visit set a new benchmark for fan engagement in Australia.

the middle man by running their own boat show, ANZ Stadium in Sydney has been similarly innovative in 2015, partnering with Destination NSW and taking on the role of event promoter for the first time, to facilitate friendly football matches between Sydney FC and two of the biggest teams in the English Premier League. The partnership saw the matches featuring Chelsea FC and Tottenham Hotspur FC draw over 150,000 football fans to ANZ Stadium, including thousands from outside of Sydney, and netted the organisations three Australian Event Awards – Best Sporting Event for the Chelsea game and Best Achievement in Marketing, Communication or Sponsorship and Australia’s Favourite Event for the Tottenham Hotspur match. Estimates from Destination NSW put the economic impact

generated by visitors for the games at $8 million each. Daryl Kerry, group managing director of Stadium Australia, which operates ANZ Stadium, highlights the benefit of government support to help events drive economic impact. “We are very fortunate in New South Wales to have a government that recognises the importance of major events and actively encourages us to host sporting and entertainment events that attract many thousands of people to Sydney and to NSW,” Kerry says. “Big events are often the key to increasing visitor numbers as international and domestic visitors travel to and within Australia specifically to see great sporting events.” Major events also have benefits broader than the visitor economy. “They can be a catalyst for participation and engagement,

“From the moment their superstars arrived, fan engagement reached new heights. They got out and about in Sydney to meet fans, and the entire Spurs team climbed the Sydney Harbour Bridge with these images beamed globally, along with world-first bridge pylon projections, as part of Vivid Sydney.” Demonstrating the power of intelligent, targeted partnership, ANZ Stadium even collaborated with the Australian Tottenham Hotspurs fan group OzSpurs who then organised a series of their own events to engage Australian fans in the days surrounding the match. In Melbourne, Creative Innovation Asia Pacific 2015, the winner of Doltone House Best Corporate Event, is making a considerable impact on the innovation landscape beyond the direct visitor expenditure of the more than 900 delegates that attended the three-day conference. Featuring short keynotes – TED style but with greater actionable take-away value – master classes and a number of other interactive, thoughtprovoking sessions exploring innovation, leadership, business and creativity, the conference is gaining attention in the knowledge economy. “In terms of economic development and economic return, our conference focuses very much on the challenges and opportunities of disruption,” says social entrepreneur Tania de Jong, who organises the conference along with Creative Universe. “We teach delegates how to manage disruption and we show delegates what’s coming – we have some incredible futurists and innovators. It is the largest representation of very high calibre international speakers under one roof in any conference

that I’m aware of in Australia. “Our focus on innovation is regarded now as the leading innovation conference in the Southern Hemisphere.” De Jong describes the conference as “breaking out of the box”, and adds, “because of its style, because of the calibre of the speakers, its unique format, it attracts very high-level delegates”. “That does create economic return – it creates opportunities for collaboration that don’t usually exist. Some of the research around innovation is that innovation can really only occur through cross-pollination.” De Jong’s conscious linking of the conference to the not-forprofit sector furthers its agenda to cause unlikely and unusual partnerships. “It’s important for the for-profit and not-for-profit sectors to actually be in rooms together,” she says. “This is all about breaking down the silos that are typically in our society at conferences. It’s about breaking down the typical ways that we communicate and collaborate and creating more positive human collisions.” As well as partnering with Creativity Australia, de Jong’s own not-for-profit initiative, a number of scholarships are offered to Asia Pacific’s up-andcoming innovators to attend the conference and present ideas to a wider and highly influential audience. Clearly the eclectic conference, which has also featured artists, singers and poets-in-residence as well as composers and graphic recorders, is striking a chord with the mix of attendees reflecting the conference’s purpose. “We get more people registering each year; we get more people from different sectors coming and sometimes from where you’d least expect them,” says de Jong. As one delegate puts it, “I’ve never seen a conference put together like an artwork before. It was a stunning achievement of vision, serendipity, generosity of spirit and organisation”.

For more than 42 years CIM has been the market leading publication for the meetings and events industry, reaching a who's who of key decision makers within the corporate, association, PCO, government and group travel agent sectors throughout Australia and New Zealand.