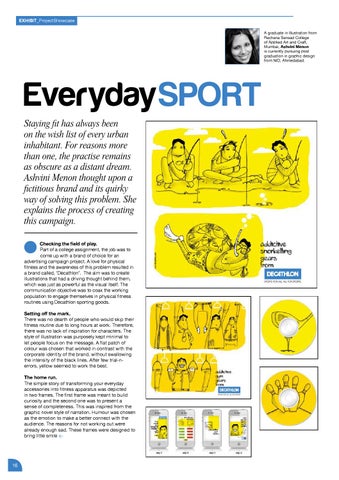 EverydaySport Staying fit has always been on the wish list of every urban inhabitant. For reasons more than one, the practise remains as obscure as a distant dream. Ashvini Menon thought upon a fictitious brand and its quirky way of solving this problem. She explains the process of creating this campaign. Checking the field of play. Part of a college assignment, the job was to come up with a brand of choice for an advertising campaign project. A love for physical fitness and the awareness of this problem resulted in a brand called, â&#x20AC;&#x2DC;Decathlonâ&#x20AC;&#x2122;. The aim was to create illustrations that had a driving thought behind them, which was just as powerful as the visual itself. The communication objective was to coax the working population to engage themselves in physical fitness routines using Decathlon sporting goods. Setting off the mark. There was no dearth of people who would skip their fitness routine due to long hours at work. Therefore, there was no lack of inspiration for characters. The style of illustration was purposely kept minimal to let people focus on the message. A flat patch of colour was chosen that worked in contrast with the corporate identity of the brand, without swallowing the intensity of the black lines. After few trial-nerrors, yellow seemed to work the best. The home run. The simple story of transforming your everyday accessories into fitness apparatus was depicted in two frames. The first frame was meant to build curiosity and the second one was to present a sense of completeness. This was inspired from the graphic novel style of narration. Humour was chosen as the emotion to make a better connect with the audience. The reasons for not working out were already enough sad. These frames were designed to bring little smile < 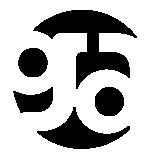 We always wish we had someone to show us the right way of doing things when we were starting our professional journey. And that’s why, we ha...

We always wish we had someone to show us the right way of doing things when we were starting our professional journey. And that’s why, we ha...