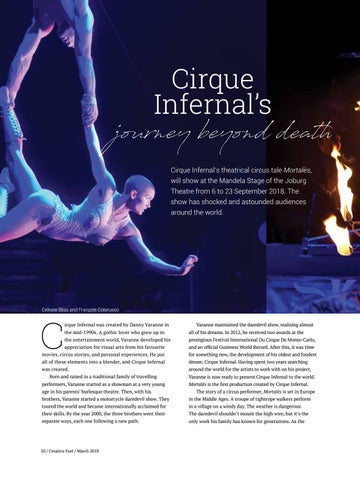 Cirque Infernal’s Cirque Infernal’s theatrical circus tale Mortalès, will show at the Mandela Stage of the Joburg Theatre from 6 to 23 September 2018. The show has shocked and astounded audiences around the world.

all of his dreams. In 2012, he received two awards at the

the entertainment world, Varanne developed his

appreciation for visual arts from his favourite

and an official Guinness World Record. After this, it was time

for something new, the development of his oldest and fondest

all of these elements into a blender, and Cirque Infernal

around the world for the artists to work with on his project,

Born and raised in a traditional family of travelling performers, Varanne started as a showman at a very young age in his parents’ burlesque theatre. Then, with his

in the Middle Ages. A troupe of tightrope walkers perform

toured the world and became internationally acclaimed for

in a village on a windy day. The weather is dangerous.

their skills. By the year 2000, the three brothers went their

The daredevil shouldn’t mount the high wire, but it’s the

separate ways, each one following a new path.

only work his family has known for generations. As the

In the March 2018 issue of Creative Feel, Nicole van Heerden and Brett Rubin share snapshots of a legend, a man of many stories, Hugh Masekela. We’re celebrating RMB Starlight Classics with a superb night under the stars and stories of an African Choir, along with the 14th SAJE Jazz Conference and musical encounters shared by our resident contributor, Dave Mann. West Side Story returns to the Fugard Theatre and Eric Abraham presents The Road to Mecca in honour of iconic playwright Athol Fugard’s 85th year. We feature Absa L’Atelier’s call for entries, the prosperous partnership between the MTN Foundation and the William Humphreys Art Gallery (WHAG) and Olatunji Sanusi’s third solo show! We have a look at upcoming art auctions and Natalie Field’s highly anticipated Human.Nature which opens at Berman Contemporary on 29 March. 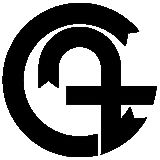