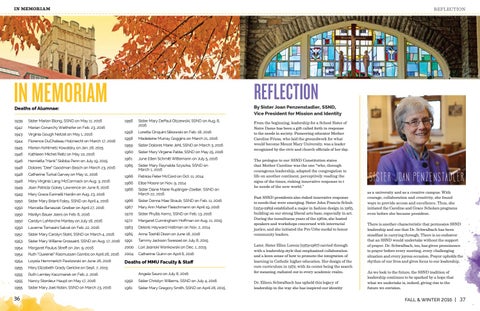 From the beginning, leadership for a School Sister of Notre Dame has been a gift called forth in response to the needs in society. Pioneering educator Mother Caroline Friess, who laid the groundwork for what would become Mount Mary University, was a leader recognized by the civic and church officials of her day. The prologue to our SSND Constitution states that Mother Caroline was the one “who, through courageous leadership, adapted the congregation to life on another continent, perceptively reading the signs of the times, risking innovative response to t he needs of the new world.” Past SSND presidents also risked innovative response to needs that were emerging. Sister John Francis Schuh (1954-1969) established a major in fashion design in 1965, building on our strong liberal arts base, especially in art. During the tumultuous years of the 1960s, she hosted speakers and workshops concerned with interracial justice, and she initiated the Pro Urbe medal to honor community leaders. Later, Sister Ellen Lorenz (1979-1987) carried through with a leadership style that emphasized collaboration and a keen sense of how to promote the integration of learning in Catholic higher education. Her design of the core curriculum in 1972, with its center being the search for meaning, radiated out to every academic realm. Dr. Eileen Schwalbach has upheld this legacy of leadership in the way she has inspired our identity

sister joan penzenstadler as a university and as a creative campus. With courage, collaboration and creativity, she found ways to provide access and excellence. Thus, she initiated the Caroline and Grace Scholars programs even before she became president. There is another characteristic that permeates SSND leadership and one that Dr. Schwalbach has been steadfast in carrying through. There is no endeavor that an SSND would undertake without the support of prayer. Dr. Schwalbach, too, has given prominence to prayer before every meeting, every challenging situation and every joyous occasion. Prayer upholds the rhythm of our lives and gives focus to our leadership. As we look to the future, the SSND tradition of leadership continues to be sparked by a hope that what we undertake is, indeed, giving rise to the future we envision. 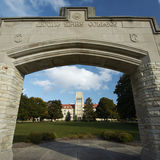