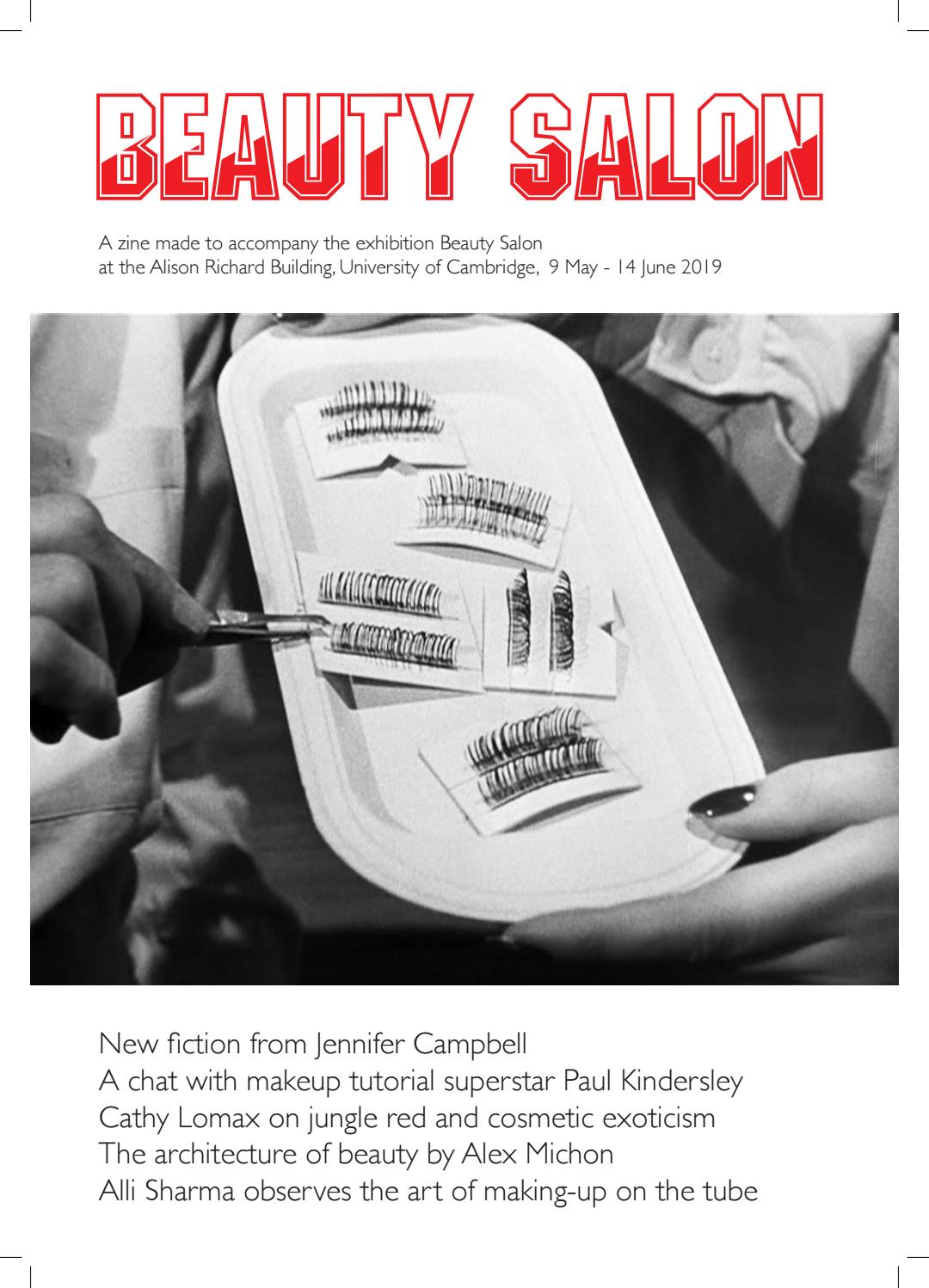 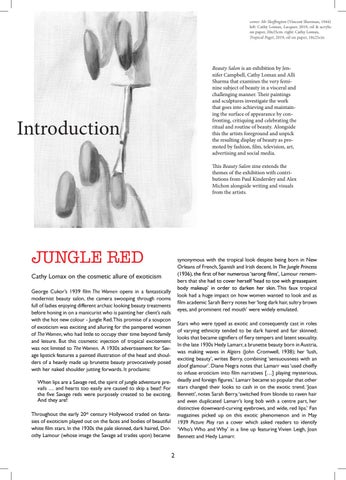 Beauty Salon is an exhibition by Jennifer Campbell, Cathy Lomax and Alli Sharma that examines the very feminine subject of beauty in a visceral and challenging manner. Their paintings and sculptures investigate the work that goes into achieving and maintaining the surface of appearance by confronting, critiquing and celebrating the ritual and routine of beauty. Alongside this the artists foreground and unpick the resulting display of beauty as promoted by fashion, film, television, art, advertising and social media.

This Beauty Salon zine extends the themes of the exhibition with contributions from Paul Kindersley and Alex Michon alongside writing and visuals from the artists.

synonymous with the tropical look despite being born in New Orleans of French, Spanish and Irish decent. In The Jungle Princess (1936), the first of her numerous ‘sarong films’, Lamour remembers that she had to cover herself ‘head to toe with greasepaint body makeup’ in order to darken her skin. This faux tropical look had a huge impact on how women wanted to look and as film academic Sarah Berry notes her ‘long dark hair, sultry brown eyes, and prominent red mouth’ were widely emulated.

Cathy Lomax on the cosmetic allure of exoticism George Cukor’s 1939 film The Women opens in a fantastically modernist beauty salon, the camera swooping through rooms full of ladies enjoying different archaic looking beauty treatments before honing in on a manicurist who is painting her client’s nails with the hot new colour - Jungle Red.This promise of a soupcon of exoticism was exciting and alluring for the pampered women of The Women, who had little to occupy their time beyond family and leisure. But this cosmetic injection of tropical excitement was not limited to The Women. A 1930s advertisement for Savage lipstick features a painted illustration of the head and shoulders of a heavily made up brunette beauty provocatively posed with her naked shoulder jutting forwards. It proclaims: When lips are a Savage red, the spirit of jungle adventure prevails … and hearts too easily are caused to skip a beat! For the five Savage reds were purposely created to be exciting. And they are! Throughout the early 20th century Hollywood traded on fantasies of exoticism played out on the faces and bodies of beautiful white film stars. In the 1930s the pale skinned, dark haired, Dorothy Lamour (whose image the Savage ad trades upon) became

Stars who were typed as exotic and consequently cast in roles of varying ethnicity tended to be dark haired and fair skinned; looks that became signifiers of fiery tempers and latent sexuality. In the late 1930s Hedy Lamarr, a brunette beauty born in Austria, was making waves in Algiers (John Cromwell, 1938); her ‘lush, exciting beauty’, writes Berry, combining ‘sensuousness with an aloof glamour’. Diane Negra notes that Lamarr was ‘used cheifly to infuse eroticism into film narratives […] playing mysterious, deadly and foreign figures.’ Lamarr became so popular that other stars changed their looks to cash in on the exotic trend. ‘Joan Bennett’, notes Sarah Berry, ‘switched from blonde to raven hair and even duplicated Lamarr’s long bob with a centre part, her distinctive downward-curving eyebrows, and wide, red lips.’ Fan magazines picked up on this exotic phenomenon and in May 1939 Picture Play ran a cover which asked readers to identify ‘Who’s Who and Why’ in a line up featuring Vivien Leigh, Joan Bennett and Hedy Lamarr. 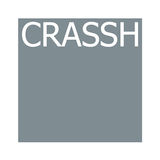 A zine made to accompany the exhibition 'Beauty Salon' at the Alison Richard Building, University of Cambridge, 9 May - 14 June 2019. The zine extends the themes of the exhibition with contributions from Paul Kindersley and Alex Michon alongside writing and visuals from artists Alli Sharma, Cathy Lomax and Jennifer Campbell.