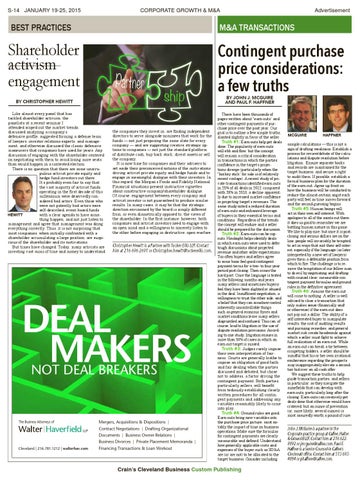 BY CHRISTOPHER HEWITT Like almost every panel that has tackled shareholder activism, the panelists at a recent seminar I attended scoped out the market trends, discussed analyzing a company’s defensive profile, suggested forming a defense team of lawyers, investor relations experts, and management, and otherwise discussed the classic defensive maneuvers that companies have used for years. Any discussion of engaging with the shareholder centered on negotiating with them to avoid losing more seats than would happen in a contested election. There is no question that there are some unscrupulous activist private equity and hedge fund investors out there. It’s probably even fair to say that the vast majority of activist funds operating in the first decade of this millennium were deservedly considered bad actors. Even those who were not patently bad actors were self-described, event-based funds with a clear agenda to have someHEWITT thing happen, and not just listen to management and agree that management was doing everything correctly. Thus, it is not surprising that most companies, when initially confronted with a shareholder accumulating a large position, are suspicious of the shareholder and its motivations. But times have changed. Today, many activists are investing vast sums of time and money to understand

the companies they invest in, are finding independent directors to serve alongside nominees that work for the funds — not just proposing the same slate for every company — and are suggesting creative strategic options to companies — not just the standard platform of distribute cash, buy back stock, divest assets or sell the company. It is now time for companies and their advisers to set aside their preconceived notions of the motivations driving activist private equity and hedge funds and to engage in meaningful dialogue with their investors. In this regard, the Morgan’s Foods and Fidelity National Financial situations present instructive vignettes about constructive company/shareholder dialogue. Of course, engagement between every company and activist investor is not guaranteed to produce similar results. In many cases, it may be that the strategic direction envisioned by the board is simply different from, or even diametrically opposed to, the views of the shareholder. In the first instance, however, both companies and activist investors need to engage with an open mind and a willingness to sincerely listen to the other before engaging in destructive, open warfare.

Christopher Hewitt is a Partner with Tucker Ellis LLP. Contact him at 216-696-2691 or Christopher.hewitt@tuckerellis.com.

The Business Attorneys of

There have been thousands of pages written about “earn-outs” and other contingent payments of purchase price over the past year. Our goal is to outline a few simple truths, slanted slightly in favor of the seller. Truth #1: Earn-outs help get deals done. The popularity of earn-outs will ebb and flow, but the concept will remain a critical consideration in transactions in which the parties’ confidence in the target’s projections diverge (particularly when the “hockey stick” for sale is of relatively recent vintage). A recent study of private transactions identified earn-outs in 25% of all deals in 2012, compared with 38% in 2010, a decline apparently due to increased market confidence in projecting target’s revenues. The same study noted a reduced duration of earn-outs and enhanced leverage of buyers in their essential terms and conditions. Regardless of the trends, the concept will endure and a seller should be prepared for the discussion. Truth #2: Earn-outs can be copouts. Hindsight helps identify deals in which earn-outs were used to defer tough discussions about projected revenue and other seller expectations. Too often buyers and sellers agree to some basic feel-good contingent payment terms for a two- to four-year period post closing. Then comes the hard part. Once the language is tested in the following months and years, many sellers (and sometimes buyers) feel they have been slighted or abused in the deal. Insufficient negotiation, a willingness to trust the other side, and a belief that they can somehow control inherently uncontrollable things such as general economic forces and market conditions leave many sellers disgruntled and confused. This can, of course, lead to litigation or the use of dispute resolution provisions. According to one study, litigation ensues in more than 50% of cases in which an earn-out target is missed. Truth #3: Judges rarely impose their own interpretation of fairness. Courts are generally loathe to impose an obligation of good faith and fair dealing when the parties discussed and debated, but chose not to address, a factor driving the contingent payment. Both parties, particularly sellers, will benefit from tediously establishing clearly written procedures for all contingent payments and addressing any variables reasonably likely to come into play. Truth #4: Ground rules are good. Earn-outs bring new variables into the purchase price picture, most notably the impact of time on business operations. Make sure the formulas for contingent payments are clearly measurable and defined. Understand how generally applicable costs and expenses of the buyer such as SG&A are (or are not) to be allocated to the target business. Consider including

sample calculations — this is not a sign of drafting weakness. Establish a process for review/debate of the calculations and dispute resolution before litigation. Ensure separate books and records are maintained for the target business, and secure a right to audit them. If possible, establish a formal business plan for the duration of the earn-out. Agree up front on how the business will be conducted to reduce the almost-certain angst each party will feel as time moves forward and the second-guessing begins. Truth #5: Human beings will act in their own self-interest. With apologies to all of the saints out there, it does us good to remember we are battling human nature in this game. We like to play nice, but once it is postclosing and serious dollars are on the line, people will invariably be tempted to act in ways that suit their self-interest, especially if the language (as later interpreted by a new set of lawyers) gives them a defensible position from which to fire. The challenge is to remove the temptation of our fellow man to do evil by negotiating and drafting with counsel clear, measurable contingent payment formulas and ground rules in the definitive agreement. Truth #6: Assume the earn-out will come to nothing. A seller is well advised to close a transaction that only makes sense (financially and/ or otherwise) if the earn-out does not pay out a dollar. The ability of a self-interested buyer to manipulate results, the cost of auditing results and pursuing remedies, and general market risk create headwinds against which a seller must fight to achieve full realization of an earn-out. While an earn-out can break a tie between competing bidders, a seller should be mindful that his or her own irrational exuberance regarding the prospects may inappropriately elevate a secondtier bid over an all-cash offer. We suggest these truths to help guide transaction parties, and sellers in particular, as they navigate the minefields that can develop with earn-outs, particularly long after the closing. Earn-outs can creatively get deals done that otherwise would have cratered, but an ounce of prevention (or, more likely, several ounces) is most assuredly worth a pound of cure.

John J. McGuire is a partner in the Corporate practice group at Calfee, Halter & Griswold LLP. Contact him at 216-6228892 or jmcguire@calfee.com. Paul F. Haffner is a Senior Counsel in Calfee’s Cincinnati office. Contact him at 513-6934884 or phaffner@calfee.com. 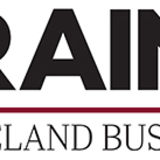