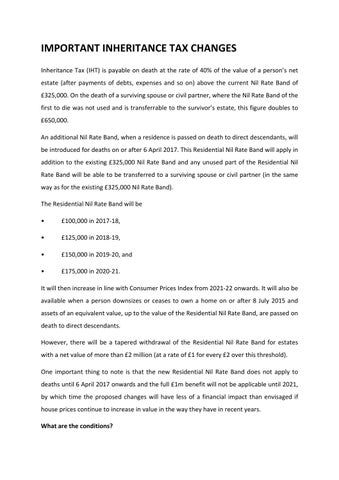 It will then increase in line with Consumer Prices Index from 2021‐22 onwards. It will also be  available  when  a  person  downsizes  or  ceases  to  own  a  home  on  or  after  8  July  2015  and  assets of an equivalent value, up to the value of the Residential Nil Rate Band, are passed on  death to direct descendants.   However,  there  will  be  a  tapered  withdrawal  of  the  Residential  Nil  Rate  Band  for  estates  with a net value of more than £2 million (at a rate of £1 for every £2 over this threshold).  One  important  thing  to  note  is  that  the  new  Residential  Nil  Rate  Band  does  not  apply  to  deaths until 6 April 2017 onwards and the full £1m benefit will not be applicable until 2021,  by  which  time  the  proposed  changes  will  have  less  of  a  financial  impact  than  envisaged  if  house prices continue to increase in value in the way they have in recent years.  What are the conditions?

The first condition is that the deceased must have had a residence at death or, at least, have  had a residence at some point after the new rules were announced on 8 July 2015.  The definition of “residence” for the purpose of the new rules is not fully clear. However it is  a  requirement  that  the  deceased  lived  in  the  property  at  some  point.  An  investment  property  will  therefore  not  qualify  although  if  it  was  lived  in  and  later  rented  out,  or  vice  versa, the property would qualify.   Where  a  person  has  more  than  one  residence  the  Executors  of  their  estate  can  choose  which residence the Residential Nil Rate Band should apply to. However, the Residential Nil  Rate Band cannot be divided between different residences.  Who can benefit from the Residential Nil Rate Band?  The residence of the deceased must be inherited by “direct descendants”, who are defined  as  children,  grandchildren  and  further  lineal  descendants,  including  step‐children  and  adopted children. The definition also extends to the respective spouses and civil partners of  lineal  descendants,  and  also  widows,  widowers  and  surviving  civil  partners  who  have  not  remarried.   Whether  the  Residential  Nil  Rate  Band  will  apply  where  a  direct  descendant  inherits  an  interest in a trust, rather than inherits outright, depends on the nature of the trust. Trusts  for bereaved minors when they reach 18 will qualify, as do trusts where an individual of any  age is given a legal right to live in the property.   In  contrast,  a  discretionary  trust,  where  no  beneficiary  is  entitled  as  of  right  to  either  income or capital or a right of residence, will not qualify. This means that many Wills that  included discretionary trusts should be reviewed.  Does the Residential Nil Rate Band apply to all estates?  The Residential Nil Rate Band is restricted if the value of the estate exceeds a threshold of  £2m.  For every £2 that the value of the net estate (before taking into account exemptions  and relief from IHT) exceeds the threshold the Residential Nil Rate Band available will taper  by £1. For deaths after 6 April 2017, when the Residential Nil Rate Band will be £100,000,  where an estate is valued at over £2.2m (or £2.4m where the unused Residential Nil Rate  Band has been transferred to a surviving spouse or civil partner) it will taper to nothing. For

deaths after  2020/21,  when  the  Residential  Nil  Rate  Band  will  be  £175,000,  these  taper  limits  will  have  increased  to  estates  over  £2.35m  in  value  (or  £2.7m  where  the  unused  Residential Nil Rate Band can be transferred).  For estates valued above the threshold there may be circumstances where it is tax efficient  to make lifetime gifts outright or to a trust in order to reduce the value of the estate below  the taper threshold.  UK Residential Property Held by Foreign Domiciled Persons  UK domiciled Individuals are subject to IHT on all their worldwide assets (subject to various  reliefs and exemptions). Individuals who are not UK domiciled or deemed domiciled (often  referred  to  as  “non‐doms”  for  IHT  purposes)  are,  until  April  2017,  only  subject  to  IHT  on  their UK assets (whereas their foreign assets are excluded from the scope of IHT).   From April 2017, all UK residential property held directly or indirectly by foreign domiciled  persons will be brought into charge for UK inheritance tax (IHT) purposes. This will be the  case  even  when  the  property  is  owned  through  an  indirect  structure  such  as  an  offshore  company, partnership or trust.  Restrictions on non‐dom status  The Government has also announced another change that will be relevant to non‐doms and  IHT: From April 2017, those who have been resident in the UK for more than 15 out of the  past  20  tax  years  will  be  treated  as  deemed  UK  domiciled  for  all  tax  purposes  and  will  therefore become liable to IHT on all their worldwide assets (subject to various reliefs and  exemptions).  Conclusion  The  new  rules  for  Inheritance  Tax  will  adversely  affect  many  existing  Wills  and  it  is  important  to  take  advice  on  your  particular  circumstances  before  they  come  into  effect  from 6 April 2017 onwards.   In particular, anyone in the situations mentioned below should seek advice now:  1. Anyone who has downsized after 8th July 2015 or who has moved into a care home  or rented accommodation; 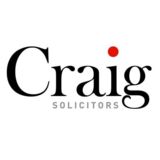 This article explains about the introduction of the Residential Nil Rate Band and changes to non-domiciled status from 2017 and highlights g...

This article explains about the introduction of the Residential Nil Rate Band and changes to non-domiciled status from 2017 and highlights g...