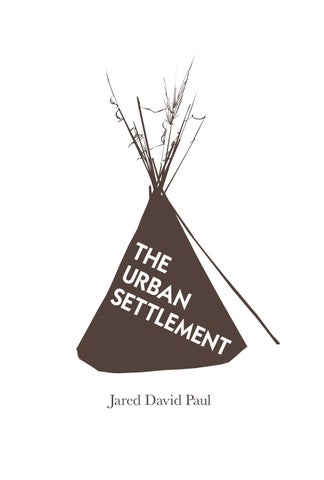 There came a point in my life when matters of the creative spirit came to the forefront for me. My helm was steered by creativity and spontaneity. Vulnerability and a spiritual plunge into art off red me a view from an inner balcony I had not yet seen. From this vantage point everything became sacred. In particular the choice of place—where creation happens, where things of the innermost complexity come to life were the apogee of creation. I made the conscious choice to live, to find this ‘sacred place’ in a tipi on a hill in East Los Angeles for a duration of four seasons. I called this the Urban Settlement. The Urban Settlement explored three objectives. First, and I’ll be honest here, it allowed a freedom from monthly expenses that had left me financially sunk. I put into personal practice ‘tents not rents.’ Yes, I was giving up certain comforts, but freeing up time for my artistic endeavors that would have otherwise gone towards countless more hours working. I was not interested in, “Hey Boss Man, I give you time, you give me money.” I bought my time with that tipi. Second, an experiment of vulnerability, an experiment without a necessary conclusion. How could I anticipate any outcome of one year of living in a tipi in one of the major metropolises of the world? I trust in the deviation of life occurrences. Especially where intuition, not the hypothesis, reign. Here failure is a celebration, and sometimes an arrival. Yes, again, the experiment of a life in a vulnerable scenario, pushing the boundaries of safety, of new circumstances and of unconventional living for a period of 365 days was the beginning, without forecast. This has frequently been the approach of many great humans. Jim Morrison explained his need to, “explore the bounds of reality to see what would happen.” Gandhi had an, “attitude of experimenting, what can and cannot be adapted to new circumstances.” My experiment: how can I adapt through putting myself in this fringe circumstance? My answer: the relief of clutter, releasing the all-too-common American need to own things; the heightened importance of community in my new circumstances; my need for art as lifestyle, a means in and of itself; and lastly committing to create a personal spiritual space. And so, the third objective is the redefini ion of self comfort. The invitation of malleability as a constant in understanding art as heartbeat of life.

How it began. . . Many circumstances allowed for this deviant (i.e. me) to land in the East Los Angeles neighborhood of Lincoln Heights. I had been living and working in a space well beyond my means in downtown Los Angeles. The space was conducive to making art but little else. It lacked a sense of community. Being that it was in a warehouse district, the area closed down at 6 pm everyday. Nightfall was isolating, lonely. Plus, I missed the nature of Colorado, where I’d spent much of my boyhood. Simultaneously, I recognized, personally, the economic struggle of the artist. Because, for the fl dgling artist, art doesn’t pay the bills no matter how insignifican the rent, or the gas, or the electric—a day job, and possibly a night job are still necessary. Despite not being careerist jobs, these constraints still leave little time and energy for art-making. I had always enjoyed driving up the pre-highway 101 to Pasadena. Its curved, dangerously sharp exit ramps were not made for the 45 mph exit it had birthed. The lanes were astonishingly skinny, so the expressions of drivers next to you were highly visible, you could read the pain, the boredom, the disallusionment on the faces as easily as if they were your own. There was something palpable on these asphalt ribbons carved through the abrupt lush hills of the Heights that I wanted to explore and live amongst. The area I chanced upon was Lincoln Heights; Avenue 28 and Johnston to be precise. It’s a solid Latino neighborhood. The 80’s and 90’s experienced gang violence and drug deals. However, community residents took back their neighborhood in the late 90’s and today it is a safe and vibrant community. I felt the community most distinctly by walking down the street and seeing my neighbor Max with his head under the hood of his 57 chevy, always smiling and greeting. There was also a toothy character, named Spider with a black widow tattoo on his neck. He was washing his gold Taurus when I moved in, and gave me the warmest welcome possible. A close friend, and Tocayo, Jared Elms, was aware of my natural wanderings and invited me to a party at a friend’s house on the hill. The party was in a little blue house on Johnston Street. That evening I met another guy, Nacho, who along with Jared Elms, was a CalArts graduate. Nacho lived with Ian James, at the time he was enrolled as a CalArts MFA,

and Evan Walsh a photographer and printer at the prestigious A &amp; I Lab in Hollywood. What a crew of art geeks, I thought. Three Amigos committed to the arts. The backyard of the house on Johnston Street was flo ting equal parts above Chinatown and Downtown Los Angeles. The yard terraced up 60 yards to a decrepit half-pipe from the 80’s where a band had played soggy riff . All the people I met were artists and musicians, moving as black silhouettes throughout the yard on the ochre city below. This community was in the natural setting I had been searching for. I could not get the little blue house on the hill or its inhabitants out of my head, for ages the night replayed in my mind. I wanted to live within the community of artists such as those on Johnston Street who were truly committed to living a life where art usurped the social pressure to take a 9-5 offi job. In response to this yearning, I pitched an idea to erect a tipi (that I did not own at the time) in the yard. I wanted to live for a year in a space that prioritized art as lifestyle. Being open-minded, experimental artists, the household all agreed to my tipi camping. I had spied a tipi, the only tipi for sale on Craigslist. It happened to be in San Francisco. The owner had brought it to Burning Man in the Nevada Desert where winds blow high and hard. He had set it up using PVC pipes, that lasted no more than an hour before the winds tumbled it, broken and balled across the desert. Utilizing the age-old barter system I asked the owner via email, “Would you consider a trade: my art for your tipi?” Again, a dose of serendipitous luck, and I was a proud fi st time tipi owner. The next missing item was the skeleton of the tipi. Lodge pole pine is standard with tipis. The cost to purchase and deliver lodge pole pine to LA was exorbitant. I decided a more regional resource was needed and settled on bamboo. But purchasing bamboo locally was as pricey as pine. Another creative solution was needed. At the time, I was an art installer by day. One day work beckoned me to pick up work at the home of modern architect and founder of SCI-Arc, Ray Kappe. In Mr. Kappe’s backyard I noticed swaying mature bamboo. To ask is to achieve, so, after discussing the tipi project with Mr. Kappe and the withstanding form of the Native American tipi, I asked If I could harvest some of his bamboo. He welcomed the idea, as pruning of the bamboo was an annual chore he much detested. I

bartered my labor for the resource, and naturally his generous support of architectural and artistic endeavors played a role in his off ring. The next weekend, with my last wad of money until pay day, I rented a fl t bed and my new roommate, and friend from the neighborhood Nacho Genzon, along with my old friend, Christian VanMinnen, partook in harvesting the bamboo for the tipi installation. The last obstacle in the set up was placing a tipi with a 22 foot wide fl t foot print on a hill. Luckily, terraces had been put into place by the owner for erosion prevention. But it still took two months in the wet Los Angeles winter of removing weeds the size of small trees and manually displacing tons of dirt to even out a terrace. When this was completed, measurements still showed the tipi would dangle two feet past the terrace wall. In response, a deck was built onto the terrace using recycled materials from the Getty dumpster to allow enough fl t space for the tipi to live. The officia move in date was January 1, 2007. The tipi was installed on March 1, 2007. I called the project the Urban Settlement and for the next year, I lived on the hill in East Los Angeles in a tipi behind the blue house on Johnston Street. I lived art, I observed and absorbed what it meant to prioritize art. The images in this book off r the story of the tipi: its visitors, happenings, and a simplifi d life, created inside one of Americaâ&amp;#x20AC;&amp;#x2122;s largest cities. The tipi was taken down July 5, 2009.

The Urban Settlement Final Words Late fall LA Afternoon as I lay laid off or fi ed. Maybe I quit long ago, stopped trying wanting doing. Slept in the fat lady on the hill, sitting content among the mustard willow and the acid pink view of downtown. Fires up north cancelled my dinner and allowed me inhalation of the rich folks burned beige carpets, subtle fl sh stuccos, Grandpa’s unread classics, synthetic silk wall paper, acrylic chandeliers refl cting pasty white colors. So I did some of my own burning -goat-head weeds and wild and dried grasses ungreen. This was a place where I lived for one year. The Urban Settlement is. Jared David Paul Anderson July 4, 2009 Los Angeles, CA

The following was overheard at the final gathering of The Urban Settlement, “Maybe he was an astrophysicist... one that wore overalls. And I’ll never forget how eerie it felt to sit in a crowded teepee cheering for the fi st sparks of man-made fi e.”

Artist Jared David Paul's experience living in a tipi in one of America's most populated cities told through an essay and pictures. 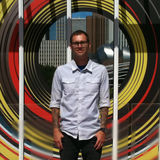