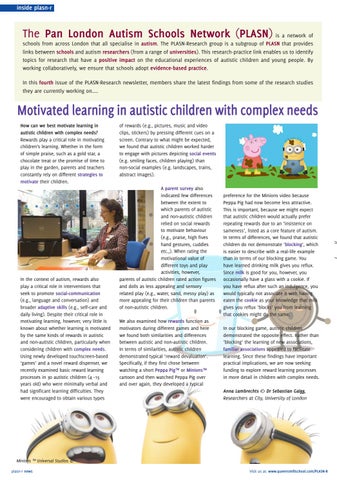 The Pan London Autism Schools Network (PLASN) is a network of schools from across London that all specialise in autism. The PLASN-Research group is a subgroup of PLASN that provides links between schools and autism researchers (from a range of universities). This research-practice link enables us to identify topics for research that have a positive impact on the educational experiences of autistic children and young people. By working collaboratively, we ensure that schools adopt evidence-based practice. In this fourth issue of the PLASN-Research newsletter, members share the latest findings from some of the research studies they are currently working on....

Motivated learning in autistic children with complex needs How can we best motivate learning in autistic children with complex needs? Rewards play a critical role in motivating children’s learning. Whether in the form of simple praise, such as a gold star, a chocolate treat or the promise of time to play in the garden, parents and teachers constantly rely on different strategies to motivate their children.

In the context of autism, rewards also play a critical role in interventions that seek to promote social-communication (e.g., language and conversation) and broader adaptive skills (e.g., self-care and daily living). Despite their critical role in motivating learning, however, very little is known about whether learning is motivated by the same kinds of rewards in autistic and non-autistic children, particularly when considering children with complex needs. Using newly developed touchscreen-based ‘games’ and a novel reward dispenser, we recently examined basic reward learning processes in 30 autistic children (4 -15 years old) who were minimally verbal and had significant learning difficulties. They were encouraged to obtain various types

of rewards (e.g., pictures, music and video clips, stickers) by pressing different cues on a screen. Contrary to what might be expected, we found that autistic children worked harder to engage with pictures depicting social events (e.g. smiling faces, children playing) than non-social examples (e.g. landscapes, trains, abstract images). A parent survey also indicated few differences between the extent to which parents of autistic and non-autistic children relied on social rewards to motivate behaviour (e.g., praise, high fives hand gestures, cuddles etc.,). When rating the motivational value of different toys and play activities, however, parents of autistic children rated action figures and dolls as less appealing and sensory related play (e.g., water, sand, messy play) as more appealing for their children than parents of non-autistic children. We also examined how rewards function as motivators during different games and here we found both similarities and differences between autistic and non-autistic children. In terms of similarities, autistic children demonstrated typical ‘reward devaluation’. Specifically, if they first chose between watching a short Peppa Pig™ or Minions™ cartoon and then watched Peppa Pig over and over again, they developed a typical

preference for the Minions video because Peppa Pig had now become less attractive. This is important, because we might expect that autistic children would actually prefer repeating rewards due to an ‘insistence on sameness’, listed as a core feature of autism. In terms of differences, we found that autistic children do not demonstrate ‘blocking’, which is easier to describe with a real-life example than in terms of our blocking game. You have learned drinking milk gives you reflux. Since milk is good for you, however, you occasionally have a glass with a cookie. If you have reflux after such an indulgence, you would typically not associate it with having eaten the cookie as your knowledge that milk gives you reflux ‘blocks’ you from learning that cookies might do the same. In our blocking game, autistic children demonstrated the opposite effect. Rather than ‘blocking’ the learning of new associations, familiar associations appeared to facilitate learning. Since these findings have important practical implications, we are now seeking funding to explore reward learning processes in more detail in children with complex needs. Anna Lambrechts & Dr Sebastian Gaigg, Researchers at City, University of London 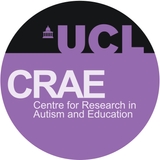 The Pan London Autism Schools Network (PLASN) is a network of schools from across London that all specialise in autism. The PLASN-Research g...

The Pan London Autism Schools Network (PLASN) is a network of schools from across London that all specialise in autism. The PLASN-Research g...