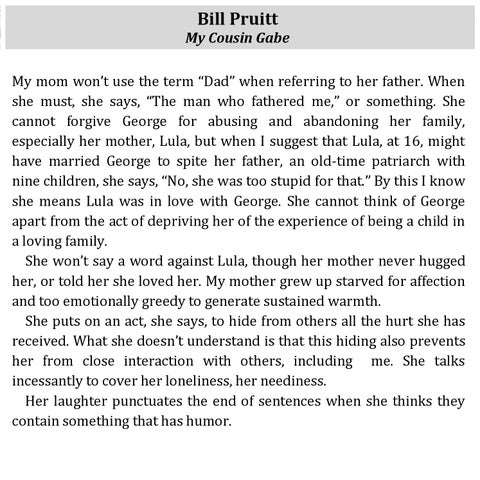 My Cousin Gabe My mom won’t use the term “Dad” when referring to her father. When she must, she says, “The man who fathered me,” or something. She cannot forgive George for abusing and abandoning her family, especially her mother, Lula, but when I suggest that Lula, at 16, might have married George to spite her father, an old-time patriarch with nine children, she says, “No, she was too stupid for that.” By this I know she means Lula was in love with George. She cannot think of George apart from the act of depriving her of the experience of being a child in a loving family. She won’t say a word against Lula, though her mother never hugged her, or told her she loved her. My mother grew up starved for affection and too emotionally greedy to generate sustained warmth. She puts on an act, she says, to hide from others all the hurt she has received. What she doesn’t understand is that this hiding also prevents her from close interaction with others, including me. She talks incessantly to cover her loneliness, her neediness. Her laughter punctuates the end of sentences when she thinks they contain something that has humor. 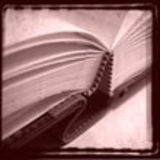