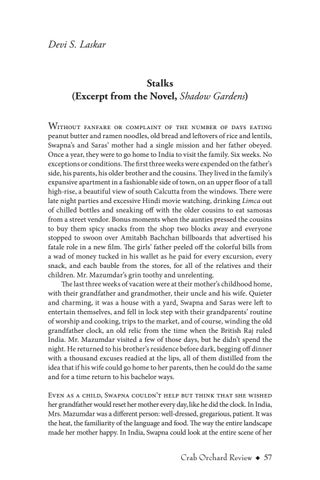 Stalks (Excerpt from the Novel, Shadow Gardens) Without

fanfare or complaint of the number of days eating peanut butter and ramen noodles, old bread and leftovers of rice and lentils, Swapna’s and Saras’ mother had a single mission and her father obeyed. Once a year, they were to go home to India to visit the family. Six weeks. No exceptions or conditions. The first three weeks were expended on the father’s side, his parents, his older brother and the cousins. They lived in the family’s expansive apartment in a fashionable side of town, on an upper floor of a tall high-rise, a beautiful view of south Calcutta from the windows. There were late night parties and excessive Hindi movie watching, drinking Limca out of chilled bottles and sneaking off with the older cousins to eat samosas from a street vendor. Bonus moments when the aunties pressed the cousins to buy them spicy snacks from the shop two blocks away and everyone stopped to swoon over Amitabh Bachchan billboards that advertised his fatale role in a new film. The girls’ father peeled off the colorful bills from a wad of money tucked in his wallet as he paid for every excursion, every snack, and each bauble from the stores, for all of the relatives and their children. Mr. Mazumdar’s grin toothy and unrelenting. The last three weeks of vacation were at their mother’s childhood home, with their grandfather and grandmother, their uncle and his wife. Quieter and charming, it was a house with a yard. Swapna and Saras were left to entertain themselves, and fell in lock step with their grandparents’ routine of worship and cooking, trips to the market, and of course, winding the old grandfather clock, an old relic from the time when the British Raj ruled India. Mr. Mazumdar visited a few of those days, but he didn’t spend the night. He returned to his brother’s residence before dark, begging off dinner with a thousand excuses readied at the lips, all of them distilled from the idea that if his wife could go home to her parents, then he could do the same and for a time return to his bachelor ways. Even as a child, Swapna couldn’t help but think that she wished her grandfather would reset her mother every day, like he did the clock. In India, Mrs. Mazumdar was a different person: well-dressed, gregarious, patient. It was the heat, the familiarity of the language and food. The way the entire landscape made her mother happy. In India, Swapna could look at the entire scene of her 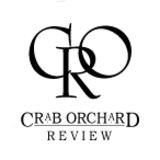