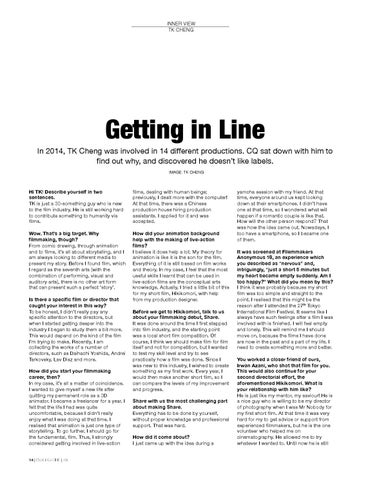 Getting in Line In 2014, TK Cheng was involved in 14 different productions. CQ sat down with him to # find out why, and discovered he doesn’t like labels. IMAGE: TK CHENG!

Hi TK! Describe yourself in two sentences. TK is just a 30-something guy who is new to the film industry. He is still working hard to contribute something to humanity via films. Wow. That’s a big target. Why filmmaking, though? From comic drawing, through animation and to films, it’s all about storytelling, and I am always looking to different media to present my story. Before I found film, which I regard as the seventh arts (with the combination of performing, visual and auditory arts), there is no other art form that can present such a perfect ‘story’.   Is there a specific film or director that caught your interest in this way? To be honest, I didn’t really pay any specific attention to the directors, but when I started getting deeper into the industry I began to study them a bit more. This would depend on the kind of the film I’m trying to make. Recently, I am collecting the works of a number of directors, such as Daihachi Yoshida, Andrei Tarkovsky, Lav Diaz and more.   How did you start your filmmaking career, then? In my case, it’s all a matter of coincidence. I wanted to give myself a new life after quitting my permanent role as a 3D animator. I became a freelancer for a year. I felt that the life I had was quite uncomfortable, because I didn’t really enjoy what I was doing at that time. I realised that animation is just one type of storytelling. To go further, I should go for the fundamental, film. Thus, I strongly considered getting involved in live-action 14 | CQ MAGAZINE | #3

films, dealing with human beings; previously, I dealt more with the computer! At that time, there was a Chinese production house hiring production assistants. I applied for it and was accepted. How did your animation background help with the making of live-action films? I believe it does help a lot. My theory for animation is like it is the son for the film. Everything of it is still based on film works and theory. In my case, I feel that the most useful skills I learnt that can be used in live-action films are the conceptual arts knowledge. Actually, I tried a little bit of this for my short film, Hikikomori, with help from my production designer.   Before we get to Hikikomori, talk to us about your filmmaking debut, Share. It was done around the time I first stepped into film industry, and the starting point was a local short film competition. Of course, I think we should make film for film itself and not for competition, but I wanted to test my skill level and try to see practically how a film was done. Since I was new to this industry, I wished to create something as my first work. Every year, I would then make another short film, so I can compare the levels of my improvement and progress.   Share with us the most challenging part about making Share. Everything has to be done by yourself, without proper knowledge and professional support. That was hard. How did it come about? I just came up with the idea during a

yamcha session with my friend. At that time, everyone around us kept looking down at their smartphones. I didn’t have one at that time, so I wondered what will happen if a romantic couple is like that. How will the other person respond? That was how the idea came out. Nowadays, I too have a smartphone, so I became one of them. It was screened at Filemmakers Anonymous 18, an experience which you described as “nervous” and, intriguingly, “just a short 5 minutes but my heart became empty suddenly. Am I too happy?” What did you mean by this? I think it was probably because my short film was too simple and straight to the point. I realised that this might be the reason after I attended the 27th Tokyo International Film Festival. It seems like I always have such feelings after a film I was involved with is finished. I will feel empty and lonely. This will remind me I should move on, because the films I have done are now in the past and a part of my life. I need to create something more and better.   You worked a closer friend of ours, Irwan Azani, who shot that film for you. This would also continue for your second directorial effort, the aforementioned Hikikomori. What is your relationship with him like? He is just like my mentor, my saviour! He is a nice guy who is willing to be my director of photography when I was Mr Nobody for my first short film. At that time it was very hard for my to get advice or support from experienced filmmakers, but he is the one volunteer who helped me on cinematography. He allowed me to try whatever I wanted to. Until now he is still 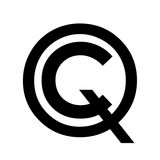 For the third issue of CQ Magazine, we feature the good (and the bad) of screens silver or otherwise, with film as this issue's theme. Get...

For the third issue of CQ Magazine, we feature the good (and the bad) of screens silver or otherwise, with film as this issue's theme. Get...