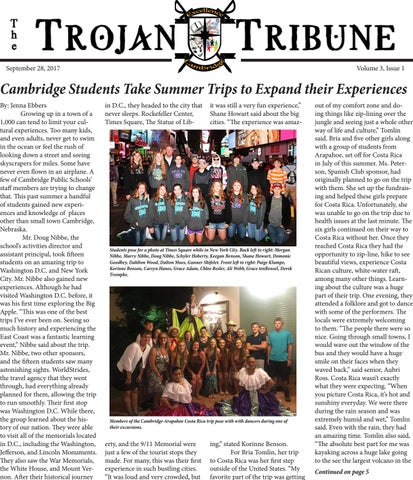 Cambridge Students Take Summer Trips to Expand their Experiences By: Jenna Ebbers Growing up in a town of a 1,000 can tend to limit your cultural experiences. Too many kids, and even adults, never get to swim in the ocean or feel the rush of looking down a street and seeing skyscrapers for miles. Some have never even flown in an airplane. A few of Cambridge Public Schools’ staff members are trying to change that. This past summer a handful of students gained new experiences and knowledge of places other than small town Cambridge, Nebraska. Mr. Doug Nibbe, the school’s activities director and assistant principal, took fifteen students on an amazing trip to Washington D.C. and New York City. Mr. Nibbe also gained new experiences. Although he had visited Washington D.C. before, it was his first time exploring the Big Apple. “This was one of the best trips I’ve ever been on. Seeing so much history and experiencing the East Coast was a fantastic learning event,” Nibbe said about the trip. Mr. Nibbe, two other sponsors, and the fifteen students saw many astonishing sights. WorldStrides, the travel agency that they went through, had everything already planned for them, allowing the trip to run smoothly. Their first stop was Washington D.C. While there, the group learned about the history of our nation. They were able to visit all of the memorials located in D.C., including the Washington, Jefferson, and Lincoln Monuments. They also saw the War Memorials, the White House, and Mount Vernon. After their historical journey

in D.C., they headed to the city that never sleeps. Rockefeller Center, Times Square, The Statue of Lib-

it was still a very fun experience,” Shane Howart said about the big cities. “The experience was amaz-

Members of the Cambridge-Arapahoe Costa Rica trip pose with with dancers during one of their excursions.

erty, and the 9/11 Memorial were just a few of the tourist stops they made. For many, this was their first experience in such bustling cities. “It was loud and very crowded, but

ing,” stated Korinne Benson. For Bria Tomlin, her trip to Costa Rica was her first step outside of the United States. “My favorite part of the trip was getting

out of my comfort zone and doing things like zip-lining over the jungle and seeing just a whole other way of life and culture,” Tomlin said. Bria and five other girls along with a group of students from Arapahoe, set off for Costa Rica in July of this summer. Ms. Peterson, Spanish Club sponsor, had originally planned to go on the trip with them. She set up the fundraising and helped these girls prepare for Costa Rica. Unfortunately, she was unable to go on the trip due to health issues at the last minute. The six girls continued on their way to Costa Rica without her. Once they reached Costa Rica they had the opportunity to zip-line, hike to see beautiful views, experience Costa Rican culture, white-water raft, among many other things. Learning about the culture was a huge part of their trip. One evening, they attended a folklore and got to dance with some of the performers. The locals were extremely welcoming to them. “The people there were so nice. Going through small towns, I would wave out the window of the bus and they would have a huge smile on their faces when they waved back,” said senior, Aubri Ross. Costa Rica wasn’t exactly what they were expecting. “When you picture Costa Rica, it’s hot and sunshiny everyday. We were there during the rain season and was extremely humid and wet,” Tomlin said. Even with the rain, they had an amazing time. Tomlin also said, “The absolute best part for me was kayaking across a huge lake going to the see the largest volcano in the Continued on page 5