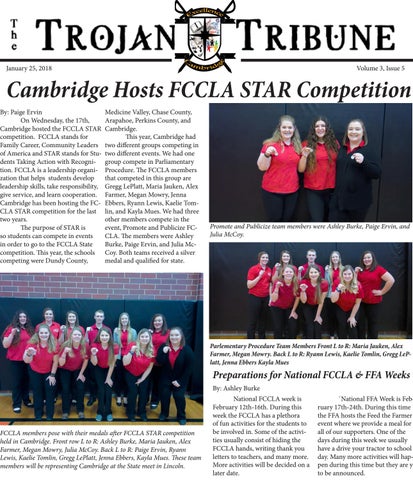 Cambridge Hosts FCCLA STAR Competition By: Paige Ervin On Wednesday, the 17th, Cambridge hosted the FCCLA STAR competition. FCCLA stands for Family Career, Community Leaders of America and STAR stands for Students Taking Action with Recognition. FCCLA is a leadership organization that helps students develop leadership skills, take responsibility, give service, and learn cooperation. Cambridge has been hosting the FCCLA STAR competition for the last two years. The purpose of STAR is so students can compete in events in order to go to the FCCLA State competition. This year, the schools competing were Dundy County,

Medicine Valley, Chase County, Arapahoe, Perkins County, and Cambridge. This year, Cambridge had two different groups competing in two different events. We had one group compete in Parliamentary Procedure. The FCCLA members that competed in this group are Gregg LePlatt, Maria Jauken, Alex Farmer, Megan Mowry, Jenna Ebbers, Ryann Lewis, Kaelie Tomlin, and Kayla Mues. We had three other members compete in the event, Promote and Publicize FCCLA. The members were Ashley Burke, Paige Ervin, and Julia McCoy. Both teams received a silver medal and qualified for state.

Preparations for National FCCLA & FFA Weeks By: Ashley Burke National FCCLA week is February 12th-16th. During this week the FCCLA has a plethora of fun activities for the students to be involved in. Some of the activities usually consist of hiding the FCCLA hands, writing thank you letters to teachers, and many more. More activities will be decided on a later date.

`National FFA Week is February 17th-24th. During this time the FFA hosts the Feed the Farmer event where we provide a meal for all of our supporters. One of the days during this week we usually have a drive your tractor to school day. Many more activities will happen during this time but they are ye to be announced.