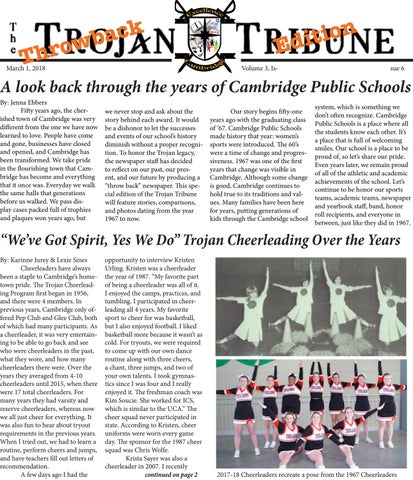 A look back through the years of Cambridge Public Schools By: Jenna Ebbers Fifty years ago, the cherished town of Cambridge was very different from the one we have now learned to love. People have come and gone, businesses have closed and opened, and Cambridge has been transformed. We take pride in the flourishing town that Cambridge has become and everything that it once was. Everyday we walk the same halls that generations before us walked. We pass display cases packed full of trophies and plaques won years ago, but

we never stop and ask about the story behind each award. It would be a dishonor to let the successes and events of our school’s history diminish without a proper recognition. To honor the Trojan legacy, the newspaper staff has decided to reflect on our past, our present, and our future by producing a “throw back” newspaper. This special edition of the Trojan Tribune will feature stories, comparisons, and photos dating from the year 1967 to now.

Our story begins fifty-one years ago with the graduating class of ’67. Cambridge Public Schools made history that year: women’s sports were introduced. The 60’s were a time of change and progressiveness. 1967 was one of the first years that change was visible in Cambridge. Although some change is good, Cambridge continues to hold true to its traditions and values. Many families have been here for years, putting generations of kids through the Cambridge school

system, which is something we don’t often recognize. Cambridge Public Schools is a place where all the students know each other. It’s a place that is full of welcoming smiles. Our school is a place to be proud of, so let’s share our pride. Even years later, we remain proud of all of the athletic and academic achievements of the school. Let’s continue to be honor our sports teams, academic teams, newspaper and yearbook staff, band, honor roll recipients, and everyone in between, just like they did in 1967.

“We’ve Got Spirit, Yes We Do” Trojan Cheerleading Over the Years By: Karinne Jurey & Lexie Sines Cheerleaders have always been a staple to Cambridge’s hometown pride. The Trojan Cheerleading Program first began in 1956, and there were 4 members. In previous years, Cambridge only offered Pep Club and Glee Club, both of which had many participants. As a cheerleader, it was very entertaining to be able to go back and see who were cheerleaders in the past, what they wore, and how many cheerleaders there were. Over the years they averaged from 4-10 cheerleaders until 2015, when there were 17 total cheerleaders. For many years they had varsity and reserve cheerleaders, whereas now we all just cheer for everything. It was also fun to hear about tryout requirements in the previous years. When I tried out, we had to learn a routine, perform cheers and jumps, and have teachers fill out letters of recommendation. A few days ago I had the

opportunity to interview Kristen Urling. Kristen was a cheerleader the year of 1987. “My favorite part of being a cheerleader was all of it. I enjoyed the camps, practices, and tumbling. I participated in cheerleading all 4 years. My favorite sport to cheer for was basketball, but I also enjoyed football. I liked basketball more because it wasn’t as cold. For tryouts, we were required to come up with our own dance routine along with three cheers, a chant, three jumps, and two of your own talents. I took gymnastics since I was four and I really enjoyed it. The freshman coach was Kim Soucie. She worked for ICS, which is similar to the UCA.” The cheer squad never participated in state. According to Kristen, cheer uniforms were worn every game day. The sponsor for the 1987 cheer squad was Chris Wolfe. Krista Sayer was also a cheerleader in 2007. I recently continued on page 2